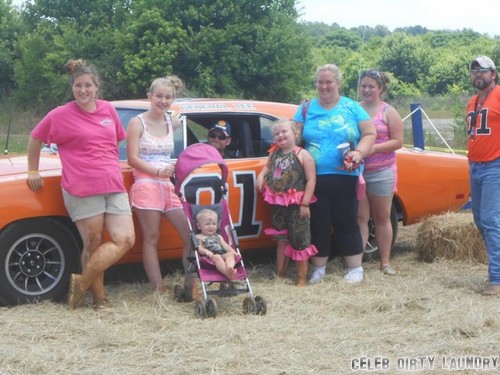 Honey Boo Boo [a.k.a. Alana Thompson] has won beauty pageants before, but this is the first time she’s ever won at an actual competition for rednecks – as far as we know. We know of her Toddlers & Tiaras days, but Honey Boo Boo made news when she won a gold medal for her dancing – at the National Redneck Olymp-Hicks in Georgia.

I know, I laughed a little [ok, a lot] when I heard the title. According to reports, it’s basically a competition for who can be the most redneck in redneck categories like loudest belch, biggest beer belly, and other not-so-classy categories.

I mean, really? Olymp-Hicks? Who comes up with this stuff? I know it’s Honey Boo Boo and the fact that our nation even considers her a celebrity is sad in itself, but I feel bad for the child. She doesn’t know better, and neither does her mother June Shannon. With any sense in the future, she’ll hopefully collect all the cash they’ve gotten from their reality show and move far, far away where people don’t know who they are.

What do you guys think about Honey Boo Boo winning a gold medal for a dance competition – at the National Redneck Olymp-Hicks? I can’t even imagine the crowd that was present at this event, much less the type of people who won ‘loudest belch’ and ‘biggest beer belly’. You’d think they’d be embarrassed about winning that kind of title, but hey – redneck and proud, I guess. At least Honey Boo Boo herself just won for dance, even if the dance itself was ungraceful and barely choreographed.

Honey Boo Boo wasn’t the only winner in her family, though. Her niece also won the ‘cutest redneck kid’ contest – and I’m not really sure if that’s an insult or a compliment.