Ian Somerhalder and Nina Dobrev Engaged to be Married? 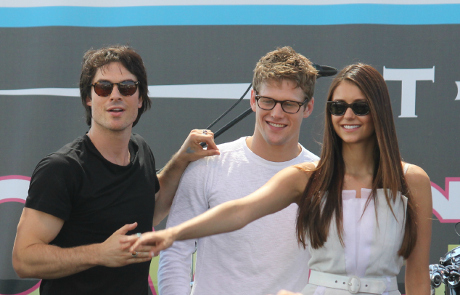 Oh boy, it was one of those weeks where for a time the internet lit up with rampant rumors that Ian Somerhalder proposed to his girlfriend Nina Dobrev. They’ve been together for more than a year.  I’m sure fans of The Vampire Diaries would love for it to be true, and frankly, so would I. But according to their reps, it’s not true — just yet. What is true is that these two really adore each other and they manage to do one of the most difficult things ever: they work together and then go home together!

They stayed beneath the celeb radar while they took the time to really get to know each other and only went public when they were sure that their love it the real deal. Now, in the last several months alone we have watched Ian and Nina traipse all over the world together. The last few weeks has sent the couple flying from LA to Colorado to Utah and then they rang in the new year in Asia! They must travel well together and have personalities that mesh otherwise these trips would have completely ruined their relationship.

I’m going to go out on a limb here and say that while Ian and Nina may not be officially engaged (at least not as far as we know) they are pretty darn close, don’t you think? They are testing their relationship in all kinds of ways and it seems to be passing with flying colors. If they are committed and loyal then they might as well be engaged.

Perhaps the biggest question when it comes to Ian involves a certain character by the name of Christian Grey. Maybe 2013 will be a huge year and he will be cast in the Fifty Shades of Grey film adaptation AND marry Nina Dobrev! Will it happen? Tell us your thoughts in the comments below!