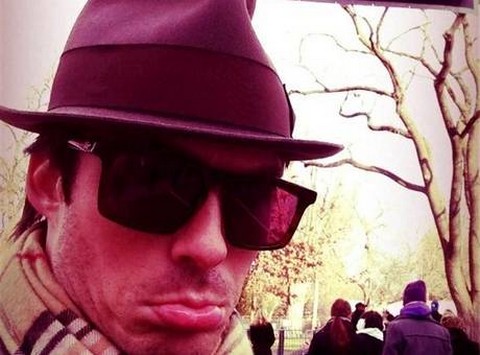 Anyone who follows Ian Somerhalder on Facebook knows that he is super involved with politics—even for an actor. He might not be hosting candidate dinner party fundraisers—yet—but the guy is all over environmental politics. Girlfriend Nina Dobrev seems to support his passion, but doesn’t really carry the same burning torch within herself. In fact, we might go so far as to say she’s borderline indifferent, and only cares because her boyfriend does! (Disclaimer: I do not know Nina, and base the above conclusion on the subject matter of her tweets. She seems nice enough.)  There’s nothing wrong with Nina—though, I’ll admit to being surprised that Ian wouldn’t seek out a partner with the same fervor . . . me, for instance.

It didn’t come as much of a surprise when we learned that Ian had ditched Nina this weekend to fly from Atlanta, where the cast of The Vampire Diaries is currently filming, to Washington DC to attend Barack Obama’s presidential inauguration. He shared his excitement, tweeting, “DC bound for inauguration! Ready to freeze for huge gathering of truly bad-ass people. Thank you to all of my bosses for letting me go to Washington!” Meanwhile, Nina was tweeting about work. “Weather is so weird in ATL,” she joked. “One day it’s supposed to snow, the next day it’s sunny, not a cloud in the sky. Bi polar weather.”

Neither shared why Nina didn’t attend, but it could be because she didn’t manage to get a ticket to the ceremony, like Ian did! Before he lost it, that is! Ian lamented, “Who lost his ticket w/great seats to the Presidential Inauguration wile grabbing food? THIS GUY! WTF?! BUMMMMER . . .” Ian attached what may be the only unattractive photo of him in existence, which shows him in a Burberry scarf frowning and puffing his lips, with a bit of a double chin. We still love him though!

This morning, Ian was back to work. “Wheels Down Atl. Let the work begin!” Nina was already at work, freezing her ears off! “Shooting in 28 degree Fahrenheit wearing next to nothing. Gotta love shooting warm weather scenes in the dead of winter.” Nina shared a photo from the set of her and Paul Wesley (who plays Stefan Salvatore, and her on-screen ex boyfriend) bundled in down coats and scarves. Freezing is a small price to pay though, considering they’re starring in the absolute best TV show, possibly in the history of all things film. In my opinion.

It’s hard to diagnose if Ian and Nina’s relationship is a case of opposite’s attract—but how opposite are they, really?—or just convenience. Or maybe  they have a plan to produce the most beautiful and talented children to continue on their species. Whatever their reason for dating, one thing’s clear: Ian is spending more and more time solo while he works with his foundation on promoting various sustainable causes. Do you think Nina and Ian will reach a fork in the road, or is she just not as vocal about her passion for all things green?