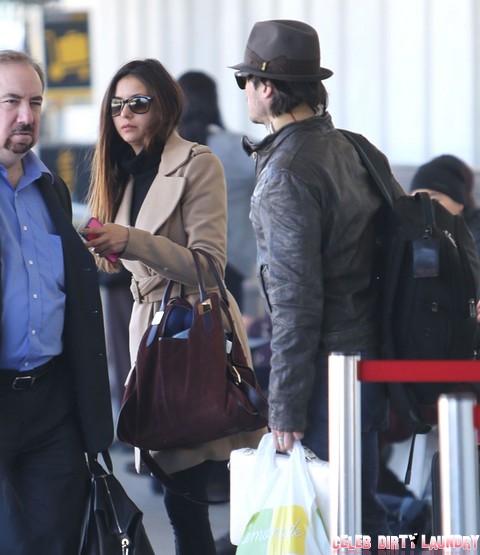 March has been a month of separation for Nina Dobrev and Ian Somerhalder. The couple first hooked up on the DL about 18 months ago and spent a year building their relationship before they dared to confirm anything at all. Once the stepped out of the shadows they became a hand-in-hand fixture not just in L.A. But all over the globe. They work together on The Vampire Diaries, seemed to live together and hopscotched across the globe together.  They attended Elton John’s Oscar party together and then- nothing. Zilch. No Nina and Ian sightings.

She has been in L.A. For most of the month of March, hanging with family and clocking fun time with her gal pals, but seemingly no time with Ian.  Instead he has traveled extensively. He has been in Austin and this past weekend he headed to Mississippi to support and celebrate the first year anniversary of “Built of Barnwood” furniture store which is a family business. Ian co-owns the store with his brother, Robert.  Ian spent hours at the celebration, chatting and taking photos with over 2,000 fans  and guess what? He looked happy as can be and hardly reeling from a break up which can only lead me to believe that it was Ian that called a time out in the relationship rather than Nina.

She is at home surrounding herself by family and friends which is what we women do when we’ve been dumped. Ian on the other hand is keeping a busy schedule and showing that his life is moving exactly at the same pace that it did when they were together.  Do you think that the split is a permanent one or does Ian just need a minute to realize that he misses Nina? Tell us your thoughts in the comments below!