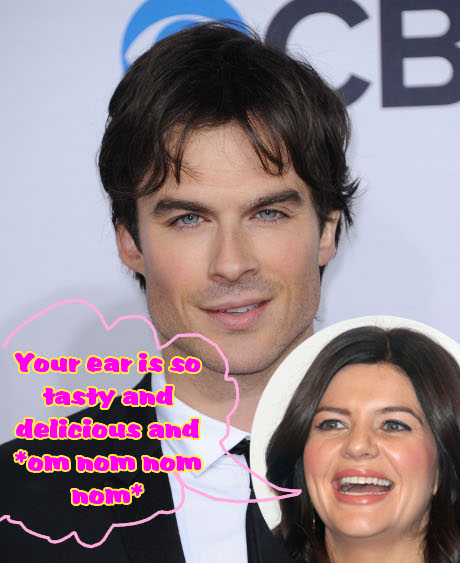 Ian Somerhalder is desired by many, and apparently he’s definitely desired by Happy Endings star Casey Wilson. During the presentation of an award at the People’s Choice Awards on Wednesday, Casey was seen hanging all over Ian. She climbed on him like a monkey climbs a tree, and she wouldn’t stop there. She even went so far as to give him a few good lickings, nice and wet ones, including a few on the ear. Um, yuck-just-a-little-bit. Haha. Her moves, as you might be able to tell from the picture posted here, lacked a bit of sexiness and smoothness. But maybe Ian liked it? Well I know who definitely didn’t like it . . . . Nina Dobrev, Ian’s very serious girlfriend and Vampire Diaries co star.

Before you jump to any conclusions and blame me for blowing this out of proportion, please just take a look at the picture by clicking here. See . . . . she really does have that tongue out — and it’s pointed right at Ian!

It’s been reported around the interwebz that Nina Dobrev is a bit of the jealous type. Ian is allegedly in talks to play the role of Christian Grey in the upcoming adaption of EL James’ novel, and star of Pretty Little Liars, Lucy Hale, is allegedly in talks to play alongside him. Now, all this is just a bunch of major allegedality and rumorage, but Nina has expressed a bit of concern. What if Ian — if he is chosen to play Christian — falls in love with his co-star and gets the full-on hots for someone other than Nina?

“You’re my boyfriend now!” Wilson purred. “You have to rub my feet and pretend to listen to me when I talk about my dreams. Love you!”

Yikes! Even if a joke, kinda creepy, right? Ian appeared fairly passive throughout the piece and, while I’m sure he consented to the little act, a piece of him was definitely uncomfortable. Right now, I don’t think Nina needs to worry about the cheating, but if he gets going in Fifty Shades . . . who knows? She might need to break out her leash and shock collar.