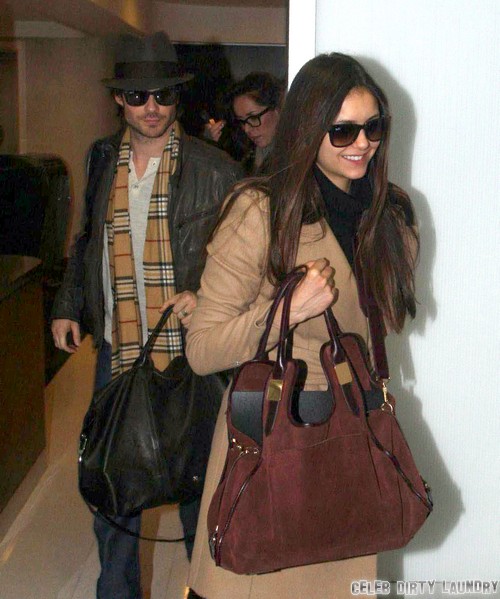 Over the weekend, rumors were making the rounds on the internet that Vampire Diaries actors and real life couple Ian Somerhalder and Nina Dobrev had called it quits. The reports suggested that the duo had gone their separate ways after a bitter argument over the weekend. Well, apparently that couldn’t be further from the truth.

Snitches on the scene said that the couple were getting heated on Saturday and even flew back to work that very same evening. In fact, they were actually in attendance at a 2013 Super Bowl party on Saturday night, so they weren’t apart at all! They weren’t even arguing, but were said to be having themselves a fine time.

Saturday night, the happy couple were all smiles at the Mercedes-Benz and Lacoste/GQ Party which was held at The Elms Mansion in New Orleans. Even better, Justin Timberlake was on hand with his pals Jay-Z and Timbaland to make the evening that much more electric. We’ve heard that Justin scored a whopping $3 million for the performance, which marked his first show in years.

Nina took to her official Twitter account to say, “JT!!!! Looking forward to seeing him bring sexy back! Either he’s been laying low – or I’ve been living under a rock. Either way…IM STOKED!”

Later, she tweeted, “JT has NOT lost it. He is a rockstar…such a great presence. He’s back baby…5 yrs. it was worth it.”

That should silence all of the breakup chatter, no?