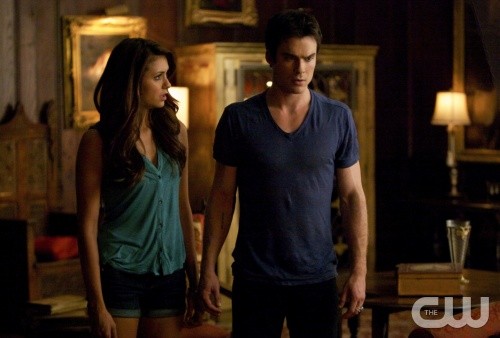 Have Ian Somerhalder and Nina Dobrev finally restored balance in the universe and gotten back together? Insiders say that, while it’s too soon to tell if they’ll get back together for good, the couple has been making an effort to see each other outside of work. Some even say they’re getting hot and heavy once again!

Despite them breaking up in May, the two remained close friends — both on and off set. Maybe all that steamy action on The Vampire Diaries did their real life romance some good? As many TVD fans know, Damon and Elena are currently a couple on the show. We’re not sure how much longer their onscreen romance will last, especially now that Stefan has his memories back, but we’re always hopeful. If only Silas could shove Stefan back in that coffin (is that bad to say?).

Talking about Damon and Elena fans, Nina told E!, “The Delena fans are so passionate and so enthusiastic and such rabid lovers of Damon and Elena’s chemistry and their relationship that obviously we’re incredibly flattered and excited about it. It is really awesome!”

What do you think, Delena superfans, will we be having something to celebrate soon?