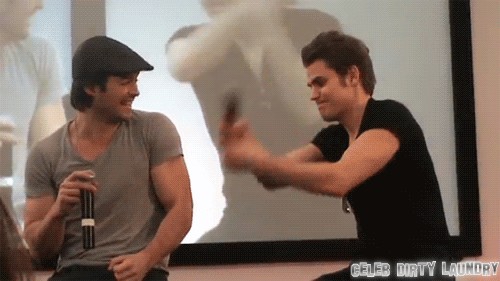 Ian Somerhalder And Paul Wesley made their second appearance at the 2013 BloodyCon to promote the Vampire Diaries, and without their co-star Nina Dobrev.

They were accompanied by many friends, family, and co-stars, including Malese Jow, David Anders, and Trent Ford. Paul Wesley’s wife Torrey DeVitto was also with them along with Supernatural star Mark Pellegrino.

The event was held in Germany and although Paul and Ian had time to make an appearance at the event, the third wheel in their Vampire Diaries love triangle was nowhere to be seen.

Of course, Dobrev is currently busy shooting the indie movie ‘Let’s Be Cops’ with Jake Johnson, Andy Garcia, and James D’Arcy. However, I have no doubt that her recent breakup with Ian Somerhalder played a part in her decision to not make time for the event.

Let’s look at it logically. Neither Ian or Nina spent the last few Vampire Diaries hiatuses apart, and they only chose smaller roles that would [I assume] enable them to spend time together. Nina’s only film roles in the past few years were a tiny role in ‘The Roommate’ and another small role in ‘The Perks of Being a Wallflower’.

Ian’s been even less busy, and his first major film role since the Vampire Diaries went on the air is the upcoming ‘The Anomaly’, which he just booked. Breaking up with each other might have been the best thing that happened to Nina and Ian’s careers, even if they continue to try their best to avoid each other.

Either way, Nina’s busy shooting a film and Ian appeared at an event without her. It’s not an unusual occurrence, but it’ll be interesting to see how long they can avoid an extended interaction with each other, especially because they’ll be headed to Atlanta to resume shooting on the next season of the Vampire Diaries pretty soon.