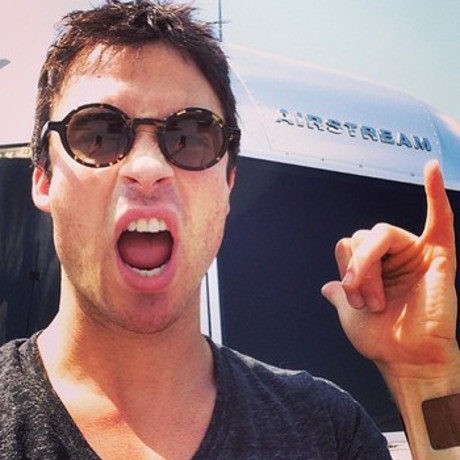 Ian Somerhalder — and his ongoing endeavor to save the environment+all things cute and cuddly — has purchased an Airstream trailer, one he wants to use very soon. But who will be his first passenger? (Choose Nina Dobrev. Choose Nina Dobrev). This isn’t the first time The Vampire Diaries star mentioned the sleek silver trailer; he commented on wanting to own one a while back and now it seems as if he’s finally made the jump to purchase. Now he’s even better equipped to slowly save the planet!

Yesterday, Ian picked up the trailer and shared a photo of himself (Ian’s a big fan of selfies) in front the Airstream. Alongside the Instagram photo, Ian said, “I got her – cant wait to sleep with her!!! My new sexy silver & recyclable @airstreamtrailer Bambi & going to be pulled by @audi Q5 clean fuel .The old man and I are driving her home – thanks Dad.”

While Ian was in talks to get the Airstream, he commented on how he wanted to take a journey with it, go off the grid, and do some exploring. He and Nina Dobrev dated for a good long time and, after their break up (or their voyage into romantic uncertainty and on-again-off-again-land), they were both visibly upset — even though they both continued to preach it was an amicable split.

While Ian might take his new baby out on the road alone, don’t you think it would be much better if he invited Nina along? Nothing is certain in their romantic world, but with hints of them getting back together circulating, perhaps a little romantic voyage in a super-leek-silver-environmentally-friendly tin can is the way to solidify it all? Will Ian invite Nina to adventure with him?

What do you think of Ian’s new trailer? He joins a long list of celebs, which includes Matthew McConaughey and Lenny Kravitz, to purchase trailers of this type. For all your Vampire Diaries needs CLICK HERE.