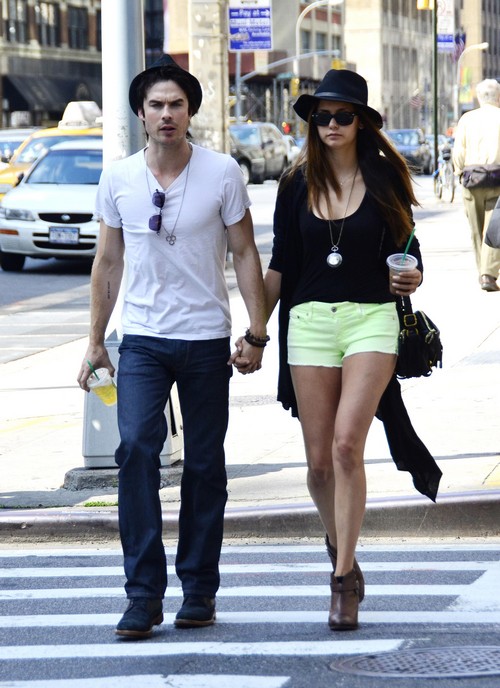 If you’re one of our many fans that can never quite get enough of lovebirds, Nina Dobrev and Ian Somerhalder, we’ve got good news for you. The couple will be making a rare public appearance together on February 2nd in New Orleans. They’ll be hitting the beach for a game of tag football in the Celebrity Beach Bowl. The annual contest pits hot celebrities against some NFL greats.

Nina and Ian’s team will also include the likes of Jenny McCarthy, Jesse Williams, Josh Hutcherson, Chace Crawford, and Ian’s rumored Fifty Shades of Grey competitor Matt Bomer. Nina is actually a Beach Bowl vet and everyone can check out the fun on Direct TV as they’ll be carrying the event.

Things seem to be going really well for this hot couple. They’ve managed to work together, live together and travel extensively together and by all accounts, they still seem pretty happy! Do you think they’re in it for the long haul? How about if Ian is cast as the lead in Fifty Shades of Grey? Will their relationship survive him doing a film based on kinky sex? Supposedly the film adaptation is expected to grab an NC-17 rating and if you’ve read the book- well it’ll be hard to do it justice otherwise, but will Nina be able to handle knowing what her man is up to for several months on the film set?

Unless of course she is cast as Anastasia Steele in the flick. But then that leads me to wonder if they could pull off the heat, simply because it’s already a part of their daily lives. Would they have enough to really jump off the screen and make the fans happy? Tell us your thoughts in the comments below! Will you be tuning in for the Celebrity Beach Bowl?