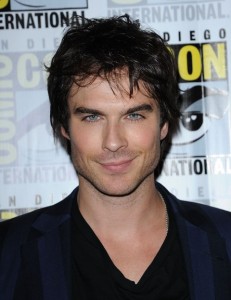 Ian Somerhalder was always tipped as a possible choice for playing Christian Grey in Fifty Shades of Grey, but I guess he didn’t realize that neither the studio nor filmmakers were willing to go with a CW actor for the role. The poor guy was probably heartbroken when he realized that, even though he tries to play it off as not being a big deal.

However, with Charlie Hunnam quitting the film, the studio will be scrambling to find a replacement, and they might even be desperate enough to allow Ian a chance. The fans are on board, as we’ve seen from the hundreds and hundreds of fan videos on Youtube. We know he’s interested, and he’s not been subtle in admitting that. So in the end, will it actually happen?

I’m sure the studio still has plenty of choices to tick off the list before getting to him, and the author of the books [E.L. James] has openly stated that she didn’t want Ian for the role. She has a lot of power in the casting choices, so I don’t imagine the studio will expressly go against her wishes.

Still, you can’t blame the poor guy for being excited. While Vampire Diaries is definitely a better show than most of what’s on the CW network, it’s still piss poor quality compared to most of television. And CW actors are not considered first rate or even second rate actors. There’s A-list movie stars [your typical George Clooney, Brad Pitt, Angelina Jolie, Jennifer Lawrence, etc.], then B-list movie star, then A-list television actors, and then B-list television  actors, and THEN CW stars. For a movie that they’re billing as the next big book to movie adaptation, would they really be willing to go that low?

We’ll just have to wait and find out. What do you guys think of Charlie dropping out, and Ian possibly replacing him? Let us know your thoughts in the comments.