Charlie Hunnam Drops Out Of Fifty Shades Of Grey Movie – Learn Why! 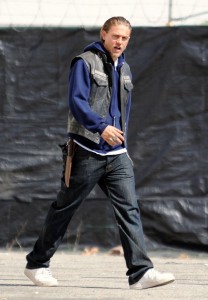 After all the hoopla around his casting, it looks like Charlie Hunnam won’t be a part of Fifty Shades of Grey after all. According to a statement released by the studio, Charlie has ‘dropped out‘ of playing Christian Grey because of scheduling issues.

The statement from Universal Pictures read, “The filmmakers of ‘Fifty Shades of Grey’ and Charlie Hunnam have agreed to find another male lead given Hunnam’s immersive TV schedule which is not allowing him time to adequately prepare for the role of Christian Grey.”

However, The Hollywood Reporter explains that their own sources have confirmed that Hunnam decided to quit after receiving an overwhelming amount of attention from the fans, and he got ‘cold feet’. Well, duh. The poor guy was forced to endure the fans signing a petition to get rid of him and replace him with other people. Who would be happy with that kind of backlash?

Besides, he’s much, much better off now. I think he initially signed on thinking that the movie would catapult him to the A-list, but it was an unusual decision from an actor who’s always made very careful career choices in the past. He is rumored to have turned down several major roles when he was younger, and he even took a year off to write a screenplay. So did he just get desperate for the fame, especially after tasting it for the first time after Pacific Rim?

It wasn’t clear, but his official reasons for taking Fifty Shades was that the chemistry with Dakota Johnson [who will be playing Anastasia Steele] was ‘compelling’, and he felt he had to do it. Obviously, it wasn’t compelling enough to make him stay, and I think he finally realized what he was signing himself up for.

At best, this movie will be a critically panned adaptation, and at worst, it will do for Charlie’s career what Showgirls did for Elizabeth Berkley. Which is to say – ruin it.

Are you guys happy that Charlie has quit Fifty Shades of Grey? Who do you think will replace him? And do you think Dakota will also get fired now, considering her landing the job was based on her chemistry with Charlie? Let us know your thoughts in the comments.