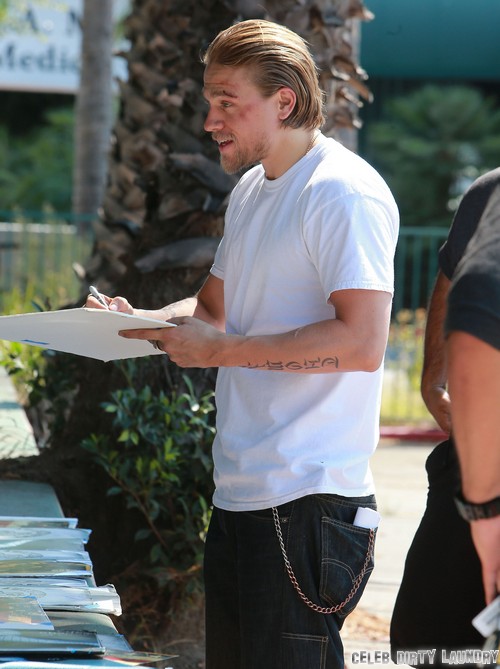 Charlie Hunnam is finally a movie star thanks to the success of Pacific Rim this summer. Sure, it didn’t do that well domestically, but it more than made up for that at the international box office. While Charlie should have followed that up with several smaller, character driven films, he decided to star in a film that might become either the biggest surprise hit of the century or the biggest critical and commercial flop of the century – a.k.a Fifty Shades of Grey.

Despite the best efforts of everyone involved, there’s only so much you can do with the source material, right? This isn’t going to be any sort of masterpiece, and there’s a high chance this could turn into a Showgirls-esque fiasco. And who would take the fall if that happened? Well, Charlie Hunnam.

Dakota Johnson, who will play Anastasia Steele to Charlie’s Christian Grey, is not a known face to audiences so she would be able to create a rebound plan if the movie failed. However, people know who Charlie is thanks to Pacific Rim and Sons of Anarchy, and if Fifty Shades fails at the box office, they will hold him responsible, citing made up statistics about how he didn’t entice enough women to come see the film.

He won’t be trusted as a lead anymore, and studios and producers will think twice before putting him on the list for major blockbusters. On the other hand, if the movie’s a hit, then he’ll have brought himself creative and financial security for the rest of his career – and his future will be set.