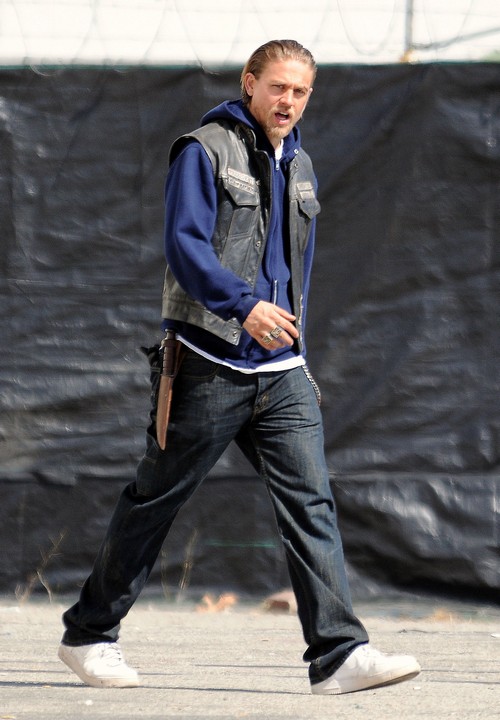 Poor Charlie Hunnam. After it was announced that he would be playing the object of millions of women’s wet dreams, many of those woman ended up revolting. Over 70,000 people signed a petition to replace Charlie Hunnam with Matt Bomer in the lead role of Christian Grey in the upcoming Fifty Shades of Grey film adaptation.

It was probably pretty difficult on Charlie’s ego, but he should have known this going into the film. There are already reports that Charlie has hired extra security while filming Sons of Anarchy because of the crazed fans. This is like Twilight all over again, except Fifty Shades of Grey fans are older and slightly crazier.

Do you think Charlie’s already getting sick of the backlash and is regretting his decision to sign onto the franchise? His public reasons for signing on never seemed that strong in the first place. He explained that his girlfriend was a huge fans of the books, and his chemistry with Dakota Johnson [who will be playing leading lady Anastasia Steele] during the audition was ‘compelling’. However, sources say that Charlie wanted to do the film to solidify his leading man status in films, because as soon as he’s wrapped with Sons of Anarchy, he wants to start doing more films. So far, the only major film he has is Pacific Rim, but that was sold on the director’s fanboy credentials. No one really knew who Hunnam was.

Well, with Fifty Shades of Grey, that might all change. For what it’s worth, he should really just hang in there, and the backlash will eventually go away. When Robert Pattinson was first announced as Edward Cullen in Twilight, there was an equal amount of hate and backlash. However, that went away and look at where Rob is now – and Charlie could be in that very same place, guaranteed franchise money and status, and able to get smaller and more dramatic movies made on his name alone.