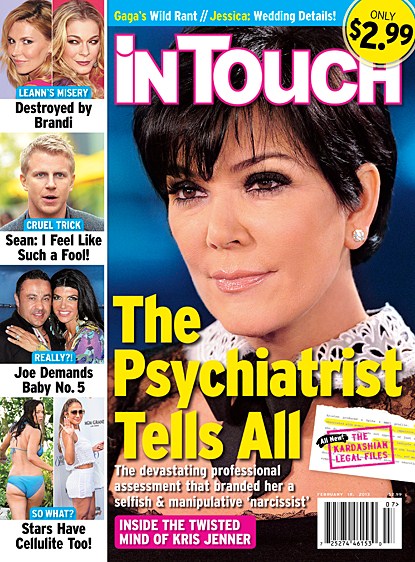 In Touch Weekly is really out for blood with their reporting on Kardashian matriarch Kris Jenner. They’ve been going after her since Ellen Kardashian released alleged diaries from the late Robert Kardashian. In the tomes, Robert wrote how much of a bad mother Kris was to her daughters and was even said to be beating Kim. Sickening, right? (Or maybe a pre-emptive move for the future sex tape?)

From the magazine’s report:

Kris Jenner’s past has come back to haunt her — and she doesn’t like it one bit. Just days after her ex-husband Robert Kardashian’s private diaries were published exclusively in In Touch — revealing his detailed portrait of an absentee mom who was verbally and physically abusive while she carried on an affair with a younger man — the family matriarch went into crisis mode.

“Kris hates that this makes her look bad. And she’s fearful of what else is out there,” says a friend of the family’s. “Kim, Kourtney, Khloé and Rob weren’t totally in the dark about their mother’s behavior, but now they know everything — and it will be a long time before their emotional scars heal.”

Kim and the other Kardashian nitwits have all taken to their Twitter accounts to deny that Kris was or is abusive to them. Do you believe them? We want to see proof of these diaries, but we are still inclined to believe that Kris Jenner is a monster. What do you think?