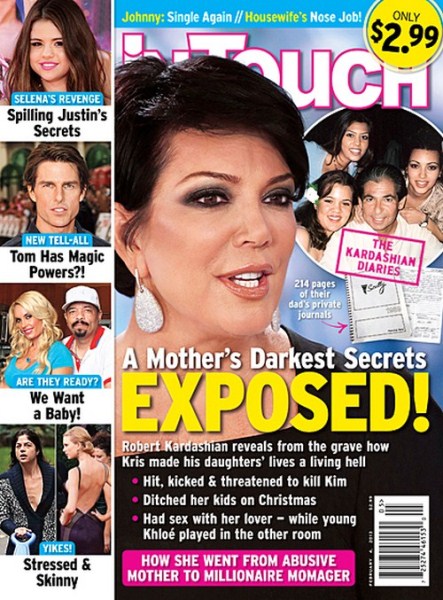 I think we all kind of figured that the marriage of Kris Jenner and Robert Kardashian ended pretty badly. Kris likes to cover her tracks but even in this instance she admitted to an affair with soccer player, Todd Waterman. That makes me think it was a whole lot worse than she is letting on or else she feared the truth would get out anyway so she divulged a bit on her own to save face.

I have to think that Kris knew that Robert kept a journal and probably didn’t care at the time but now, I’m sure she does. His widow, Ellen Kardashian must have gotten really tired of watching the Kardashian family put themselves up on pedestals- especially Kris, so she decided to wreck a bit of havoc. She took Robert’s diary from 1989=90 and plunked it right into the hands of In Touch Weekly and the new issue gives readers an exclusive inside peak at what a monster Kris really is!

According to Robert she beat and threatened to kill Kim Kardashian and she would disappear for days on end with no way of being contacted. Robert knew she was shacked up with Todd while he cared for four kids under the age of 11! The picture that his diary paints is exactly the same as what the media has long speculated about. The debate over Khloe Kardashian’s paternity was all over covers last week and we have seen by her actions that Kris cares more about business than she does about being a mother.

As for Ellen turning over the diary, well she had this to say,

“These are authentic handwritten journals I have shared, that my late husband Robert Kardashian so carefully wrote during 1989 and 1990 at a most trying and touching time of his life. They are my personal possessions and he left them to me on his passing.”

It’s like she has handed the media the smoking gun that we’ve been waiting for! Do you believe that Kris Jenner is a monster behind closed doors? Tell us your thoughts in the comments below!