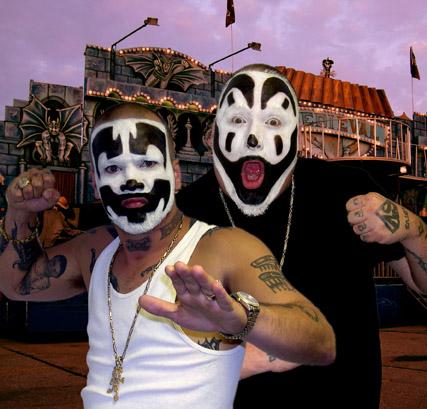 Have you heard of the Insane Clown Posse? No, I’m not making that name up. The rapper group was named #1 on GQ Magazine’s feature ‘The 25 Worst Rappers of All Time’, despite actually being much better than most rappers.

Obviously, the rappers in ICP aren’t taking very kindly to this insult. Violent J and Shaggy 2 Dope [I really wish I was making these up] told TMZ, “Insane Clown Posse has been selling rap records, rocking rap stages and making rap money for over 20 years now. You can’t rack up all that rap success for this long and still be ‘the worst ever.’ GQ magazine should stick to what they know: Dressing preppy metrosexuals.” They also added, “Tell GQ to say it to my face!”

Well, then. Challenge extended to GQ. I hardly think that the magazine will respond to this, considering that they piss people off on a pretty regular basis. But there’s truth in Violent J and Shaggy 2 Dope’s comments. GQ is best at ‘dressing preppy metrosexuals’. How can they claim to be an authority on rap music? I can understand Billboard making these kinds of lists, but GQ? Really?

What do you guys think about ICP being the worst rappers on the list? Do you love them or hate them, or are you indifferent? And how do you feel about the others on the list, including Vanilla Ice, MC Hammer, and Pitbull? And do you agree that GQ is known more for its preppy image than its authority on rap music? Let us know your thoughts in the comments.

Editor’s Note: ICP rank with Geto Boys as two of my favorite rap groups of all time – GQ, well that I use to start bonfires or line the bird cage.  Enjoy three of ICP’s classic hits below.