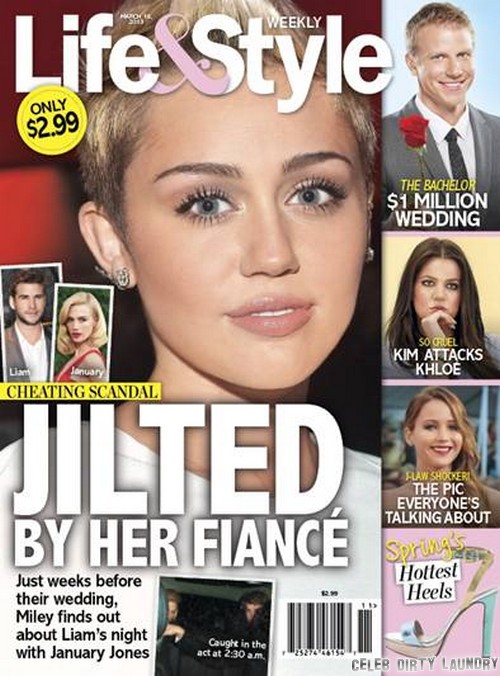 After Miley Cyrus’ fiance Liam Hemsworth was spotted sharing a car with Mad Men actress January Jones, we were all left wondering what exactly happened. Was January being nice in giving Liam a ride, vice-versa or was there some nefarious cheating going down? The latest issue of Life & Style Weekly has the low-down on all of the happenings of the Oscar party night between Liam and January.

Liam and January were said to be partying it up at a Grey Goose pre-Oscar party in Los Angeles on February 23rd. After they left the party at the Chateau Marmont, things got even more heated between the unlikely pair.

A source revealed, “They went to a private house party, and right in the middle of the party, January was clinging to Liam, saying, ‘You’re so handsome’. He kept saying, ‘We can’t do this here.’ Then they left holding hands and went out in the hallway and were making out. She was wasted. It wasn’t good.”

As far as how Miley reacted to the news, she was said to be heartbroken over the cheating fiasco. A pal said, “Miley is freaking out. She’s been telling her friends that she trusts him, but if she finds out the cheating claims are true, their engagement is over.”

A source revealed to the publication that January is no stranger to getting what she wants, no matter the cost. The source said, “When it comes to men, January just goes for it. She doesn’t seem to care if they’re with someone or not. It’s like a challenge for her, a game.”

What do you think of the cheating claims? Is Liam innocent in all of this? Or was he a victim of January possibly throwing herself at him? Let us know your thoughts in the comments!