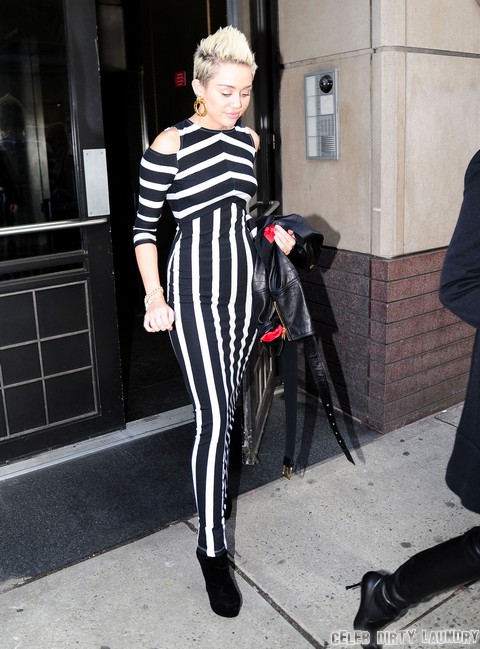 Miley Cyrus is notoriously open when it comes to sexuality, and has been caught kissing girls half a dozen times. She’s also a skilled lap-dance-giver, and isn’t shy about her sex life. But just because she’s willing to spill secrets doesn’t mean fiancé Liam Hemsworth can! The two were in a huge fight after Miley overhead Liam spilling their bedroom secrets. An unfair double standard? For sure, but that won’t pacify the ex Disney star!

“Miley blew up and got right in Liam’s face,” an insider told National Enquirer, print edition February 25, 2013. Apparently, she walked in on Liam “dishing intimate sexual details while bragging to brother Chris Hemsworth about a wild night they’d just enjoyed!” Miley spends so much time groping strippers, we’re surprised she has any room for embarrassment or shame. “She was stunned that Liam was talking about their sexual encounters to anyone, but especially livid that he’d confided in Chris!” Isn’t that fairly normal though? The Australian brothers seem pretty close, so why wouldn’t they brag about bedroom conquests?

Liam was quick to point out the double standard, and Miley snapped, “That’s different! They’re my girlfriends and you don’t hang out with my girlfriends. But I have to see your brother all the time—I don’t want him knowing what goes on in our bed!” That could make for some pretty awkward family dinners, to be fair! Maybe it’s time for Liam to start making some guy friends in LA, so he can protect Miley from the embarrassment of extended family time with people who know about all her weird sexual fantasies and kinky antics. Do you think Miley is being overly sensitive, or is asking to keep their bedroom life out of family gossip fair? Should Liam have known better? Is the damage done, or will Chris be forever scarred by the though of Miley in compromising positions?