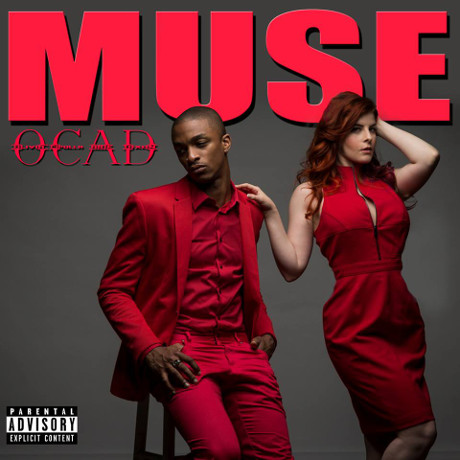 O.C.A.D., a duo comprised of Olivia Cipolla and Arie Dixon, has some incredible music. Olivia has performed with some of the top acts in music today — Beyonce, Jennifer Lopez, Usher, Black Eyed Peas and more — and has appeared in major films and television, including Oprah’s Last Show, the VMAs, the Billboard Awards, the American Music Awards, and more. She is a show-stopping, electric singer, dancer, actor-model, songwriter, and choreographer, and she assisted with the choreography for Beyonce’s hit video, “Dance for You,” earlier this year. You can download the album from iTunes!

Arie Dixon is a prolific and multi-talented songwriter, producer, and performer with a massive following from his mix-tape series, The Jack Moves, and has recently released The Jack Moves Volume 4. He is a winner of countless Hip-Hop competitions, including 2 razz, Thisis50, The Training Camp, Raise the Bar and others, and his powerful live performances have generated a huge New York audience. He has become one of today’s “NEED TO LOOK OUT FOR” up-and-coming artists. Together, as O.C.A.D., Olivia and Arie have released their debut album, THE TRUTH, with their first video single — “MUSE” — available on VEVO and YouTube now.

1. Before you began performing together, you two already had produced bodies of work individually that are amazingly diverse as well as critically praised. How and when did you find each other? Friends in common, intuition, fate, or maybe chance? How did you two meet and form this collaboration?

Well we first met about 6 years ago, on a gig, while Arie was still on the grind for his solo rap career, and Olivia was still in pursuit of her commercial dance career. We then were re-acquainted 2 years later in Hollywood, California, just by running into each other on the street. After catching each other up on our lives, we began to organically create music together. Arie was co-writing and producing on Olivia’s project, while Olivia was singing on Arie’s solo projects. Since we were doing everything on our own, we then decided to do a collaborative project, which is when The Truth Album was created. We were so engulfed in the music, that we didn’t even realize what we were embarking on. To the point where we 1st released the album, without having a group name. I guess you can say it was a combination of intuition and fate that started it all.

No, we are best friends, basically like family. We are like two lost kids in a sandbox who inspire each other, I guess you can say we are like each other’s “Muses” (pun intended).

3. Tell me about your recent association with Tommy Boy records and about the new music video release with Vevo?

We just recently signed with Tommy Boy to a deal that is sort of unheard of in today’s industry. They are dedicated to the artists that they get behind, plus they work hard, and as do we so it makes for a perfect match. There’s a part of us that initially felt relieved to be signing with a label, because now we have a team. But we are more excited to be on a bigger platform, which in turn has inspired us to work even harder. The release of our video “Muse” on Vevo has put it all into perspective how far we have come, and how much farther we will go.

4. If you had pick one fave song off your album what would it be and why?

It’s so hard for us to pick a favorite song, only because every song is a part of us, and they all play a specific role in The Truth Album. As artists, we look at the entire body of work as one, and each song plays a significant part in the experience of The Truth Album. But, since we have to pick . . . .

Olivia Cipolla: I would have to say “Little Girl Big World” is my favorite at the moment, because the song has so much personal meaning to me at this point in my life. It was inspired by someone who is really close to me.

Arie Dixon: At this moment, the song that I enjoy the most is “No Man’s Land”. The combinations of sounds, from the heavy bass and the piano accompanied by Olivia’s Angelic tone, mixed with the aggressive taiko drums, with the added subject matter and constant changing in and out of vibes, excites me to see what we will do next. I still don’t even know what genre of music it fits in, which I love.

5. You guys have such an amazing and diverse music talent and range. How did you guys develop such skills and blend them so well together? Do you fit the pieces together like a puzzle or do they flow together?

Looking back on the creation of The Truth Album, it’s so hard to say how it all just came together. But by us being fans of so many different genres and sounds, Olivia being classically trained, and Arie being a producer and rapper, we knew that it wasn’t going to be your typical sound. We just let it flow, we never hinder each other’s artistic wants. Instead we completely embraced our diversity, that’s the only way we are able to create.

6. Do you ever worry that you two are weaving in and out of too many genres at once?

No, not at all. To be honest, half of the time we don’t even know what genre of music we are creating. We just love to make music; we never think about putting it into a box. That is for the people who just want to categorize things, so they can try and better identify it, instead of just letting art be art.

7. Did you both write all the songs together on the album? Also, the lyrics on the truth album seem to all have a deep meaning and message. Can you go a little more in depth on the lyrics and inspirations for the songs?

Yes we both co-wrote the album, and Arie produced it. When we first decided to create The Truth Album, the main focus was to speak on things that were 1) Real to us, and 2) The things that people are going through on a daily basis around the world, that just weren’t being spoken about. To be honest, that’s really the main premise of how we pick our subject matter. We just want to talk about things in a way that people aren’t, and being that we are complete opposites in every way, we have such a diverse perspective on any subject we pick.

8.Also, if there was one message you would like to share with the world through your musical and talents what would it be ?

Individuality is key. No one person on this earth is the same, or has the same story, so don’t feel the need to fit in when we all stand out in our own right.

9. What does the rest of 2013 look like for you both? Performing live? Touring? Back to the studio? Future projects?

The rest of 2013 is getting busier and busier for us. We are in the process of booking more live shows, we are recording a new body of work as we speak, and the next video will be coming out at the top of September. In December we will be performing at Art Basal in Miami, so if you or anyone are in Florida at that time, make sure you come check out the show. We have a few more things coming up, but can’t completely talk about them yet. All we can say is that we are really looking forward to what’s next, and what we are going to be delivering.