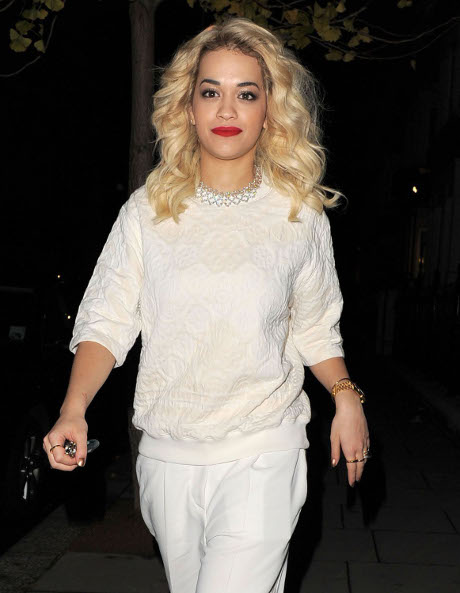 Once Rob Kardashian decided to tell the entire world that his former flame, Rita Ora, was the biggest whore ever, complete with a list of guys that she cheated on him with, the rumors started spinning. Ironically, the up-and-coming singer doesn’t seem to care if the world knows that she bangs everything in her path either. She almost seems proud of it, until you try to link her to Jay-Z. That’s where she even draws the proverbial line.

There has been some insinuation for years now that Jay was hooking up on the sly with his young protegee and after Rob’s recent comments the rumors picked up some momentum all over again. Rita has admitted to being star struck by Jay, who signed her to his record company back in 2009, but insists that is the one man she hasn’t laid a fake nail on.

I’m going to hope for both of their sakes nothing has gone on there because I would really hate to think of Beyonce’s reaction if she believed even for a second that her husband was cheating with someone like Rita! Hell hath no fury and I’m gonna bet that Beyonce’s temper when played would send both Jay and Rita running for cover!

Do you believe that Rita has kept her hands off of Beyonce’s man? More importantly do you think Bey believes her or has she taken a look at this chicks track record and thought twice about where Jay has been? Obviously you can’t trust Rita for a hot second with your guy but do you think that Beyonce can trust Jay?  They’ve already made it a long time by Hollywood’s standards, will this be one of the few couples with true staying power? Tell us your thoughts in the comments below! Is Jay-Z cheating on Beyonce?