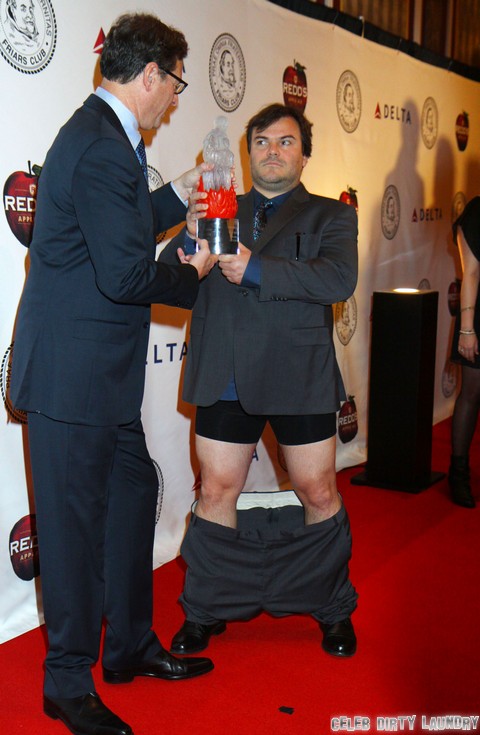 Live from the Friars Club in New York City our intrepid reporter, Kristine Francis brings you all the hot photos and details of the Jack Black Roast! Continuing on with the tradition of over 50 years, today Jack Black was roasted at The Friars Club in NYC. Bob Saget, a man I have always seen as gentlemen, took time before his upcoming tour to be the roast master for today’s event. The full guest list was comprised of Sarah Silverman, Dee Snider, Debbie Harry, Jeff Ross, Oliver Platt, and many more. Although the carpet was full of celebrities, the main attraction happened to be A Noche Libra Dunk Tank. All those who tried minus a Debbie Harry got to dunk a well-built version of Noche Libra.

Coming onto the carpet, the stars all said nothing would be off limits for the Roast. Especially one Michael McKean who jokily said he’s going to “sit back and watch the carnage”. As matter of fact the only people that implied that their limits were comedienne Amy Schumer and the sacrifice of the night, Jack Black. Unfortunately not joined by his wife, he mentioned there being a foggy line of what is tasteful. Which is surprising when Jeff Ross was the one to tell the press that Jack called him the other day and gave him the all clear/nothing barred talk. How foggy a line and should it even exist at a roast?

I guess the Roast can be entertaining without the imagined crass cannibalism. So much so Gene Simmons made a family affair out the event.  Gene was joined by a number of musicians who came today. Among them were the Spin Doctors who all agreed to loving Jack on guitar. We remember Jack Black the actor and comedian but tend to forget the musician. Why; when one could say his contemporaries all agree that he rocks it out.

Yet with all the admiration on the carpet, how did the good people roast him? Reports are already coming in on the event and Jack’s still alive, so at least there’s that. The event was sponsored by Redd’s Apple Ale and Delta Airways. There were no obvious aviation signs but there were people feeling parched. All in all it was a good event.