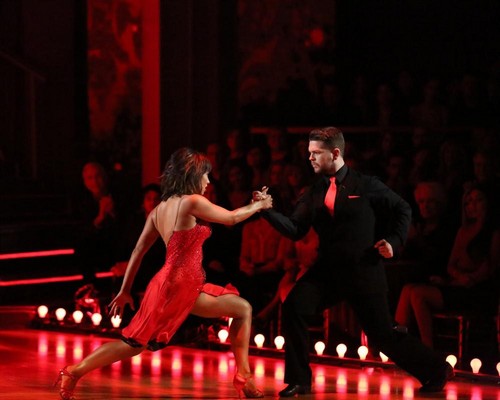 Tonight on Dancing With The Stars Finale Week begins and the couples competed in three rounds of dance.  For the last round Jack Osbourne danced a Supersized Freestyle.  Historically the freestyle is one of the most entertaining dances of the season.   To check out Jack’s DWTS bio [CLICK HERE]  If you missed tonight’s show you can read a full and detailed recap, right here.

On tonight’s show the four remaining couplescompeted in three rounds of dance. In the first round, each couple will take on the “Judges Pick” and repeat a selected routine from earlier in the season. In round two, the couples will be challenged to a Samba relay, where each pair dances to a different section of the same song. The Samba relay will be accompanied by 90’s hip hop group TLC who will perform their classic hit “No Scrubs.”

On last week’s show Jack was given a 33/30 for his Jazz routine.  Carrie said about his dance: “I just have to say that every once in a while the pro nails it, and we have to give credit where credit is due, Chery you nailed it.” If you missed any of last week’s performances, you can check out all the videos, right HERE.

Judges Scores: Carrie Ann “That was a show stopper, fitting for a king, the best fairytale ending.” Len “You were under so much pressure, your family should be so proud of you, that was a true show stopper.” Bruno “Hooray for Hollywood and hooray for Jack, Cheryl did an incredible job.”

Watch the video below and let us know what you think? Do you think Jack did enough to avoid elimination tonight? Sound out in the comments below!