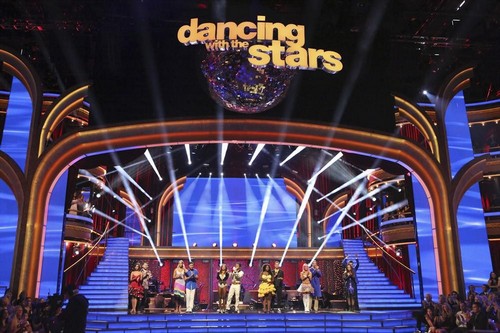 Tonight on ABC Dancing With The Stars returns with all the glitz, glitter and drama.  On tonight’s episode the competition heats up as the remaining five couples compete in the semi-finals.  Also Maksim Chmerkovskiy returns to the ballroom and for the first time participates as guest judge.  Did you watch last week’s episode when the celebs learned an individual new dance and participated in a group dance?  We did and we recapped it right here for you.  If you missed any of the performances from last week, we have all the videos HERE for you to watch!

On last week’s show the couples competed in two rounds of dance. In the first round, each couple took on an individual dance in a style they had not previously performed including the Viennese Waltz, Tango, Charleston, Argentine Tango and Quickstep. In the second round, the couples took on a new challenge and dance with an eliminated pro or troupe member as part of dynamic trio. The trio dance routine will be in a style the celebrity has not yet performed including the Samba, Jive, Salsa, Paso Doble and Jazz. At the end of the night, Elizabeth Berkley Lauren and Val Chmerovskiy were sent home.

On tonight’s show it will begin with a spectacular opening number by Emmy® Nominated choreographer Mandy Moore, featuring the pro dancers. The couples then must rise to a new challenge and perform to two different versions of the same song. In the first round of competition, the couples will perform either a Jazz, Paso Doble, Cha Cha or Tango routine to an original or “plugged” version of their selected song. In round two of competition, the couples will perform either a Viennese Waltz, Argentine Tango or Rumba routine to an acoustic or “unplugged” version of that same song.  At the end of the night, one couple will face elimination.

Judges Comments: Len said: “I thought it was a little bit careful, next time give it some willy!.” Bruno said, “Leah, my darling, you missed a turn twice..” Carrie Ann said: “You know what I like is you definitely brought the drama, at the semi-finals we have to be a little bit stricter.!” Guest Judge Maksim: “I liked it I thought it was great, it needs a couple things, I’m overlooking that you stepped on your skirt, it’s not a technical mistake.”

Judges comments: Carrie Ann said: “That was hot, and I would like to see that again.” Len: “It was too full on. Tango is about calmness, and then attack, this was just full on attack. As a Tango it wasn’t really my cup of tea..” Bruno: You had so much drive, so much intent, so much passion, that it was almost untamable.” Maksim: “Content was amazing, and the fairy dust, whatever it was, was awesome.”

Judges comments: Len said: “For me this lacked a little bit of finesse. “ Bruno: “The fact is that was a very hard routine for someone who is not used to Jazz. The interpretation was very, very good.” Carrie Ann: “I just have to say that every once in a while the pro nails it, and we have to give credit where credit is due, Chery you nailed it..” Maksim: “I loved it I thought it was great.”

Judges comments: Len said: “Bill, maybe you’re not always the judge’s champion, but you are the people’s champion.” Bruno: “The pleasure you gave us, the laughs is pure enjoyable.” Carrie Ann: “I thank you for bringing the joy back to the ballroom” Maksim: “There were a lot of holes in this Cha Cha, but people look up to for what you’re doing.”

Judges comments: Bruno said: “You are just incredible, your versatility is astonishing…” Carrie Ann: “It’s like you’re in a class of your own. It felt like a mathematical equation and you solved it..” Len: “Do it again!” Maksim: “It was amazing and incredible. Great job.”

Judges Comments: Len said: “I liked it fine..” Carrie Ann said: “This comes from pure love, because I really relate to you. I honestly think you need to have more confidence.” Guest Judge Maksim: “You’re a real woman and you bring exactly what this competition needs. Just you and your personality needs to come out..” Bruno: “I thought it was very pretty.”

Judges comments: Carrie Ann said: “Corbin, your body is a wonderland. I am so glad you took your shirt off. Fantastic rumba!” Len: “I thought your technique was great, that was a great rumba..” Bruno: “The quality of movement was unbelievable. The storyline was flawless.” Maksim: “Your body is not a wonderland to me, but when you took your shirt off it was very technically savvy.”

Judges comments: Len said: “You came out and you really sold the dance. Well done. “ Bruno: “You were as slick as a prowling panther.” Carrie Ann: “You’re such an inspiration to so many people. You were so in the zone! I am so proud of you..” Maksim: “Great routine, great precision, the dance was great.”

Judges comments: Len said: “Bill, I don’t know that you have the skill to win, but you have the will to win.” Bruno: “Everything an Argentine Tango should be, was there.” Carrie Ann: “You never missed a beat!” Maksim: “The musical interpretation was amazing. I love you. You were great.”

Judges comments: Bruno said: “You dance like an angel.” Carrie Ann: “You brought me to tears. You are just something special Amber Riley..” Len: “There was fire in that performance, I loved it!” Maksim: “You’re amazing.”

To See Who Got Eliminated From Tonight’s Show CLICK HERE

See you next week for the finals!