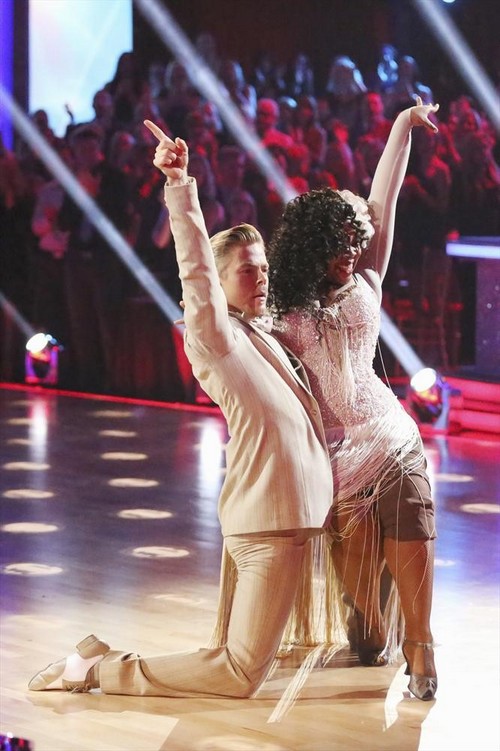 On tonight’s Semi-Finals of Dancing With The Stars the couples competed in two rounds of dance.  For her FIRST ROUND Amber Riley danced a Jazz routine for a dance style she had not previously performed. Check out Amber’s DWTS bio [CLICK HERE] If you missed tonight’s show you can read a full and detailed recap, right here.

On last week’s show Amber was given a 27/30 for her Salsa routine.  Carrie Anne said this about her performance, “You guys were like the dream team, I can’t believe Amber was injured and danced like that.”   If you missed any of last week’s performances, you can check out all the videos, right HERE.

Amber Riley and professional dancer Derek Hough: dancing a Jive.  Amber had this to say about her dance tonight, “Ready to dance, had a little rehearsal this morning to shake the nerves! Wanna make you all proud :-)”

Judges comments: Bruno said: “You are just incredible, your versatility is astonishing…” Carrie Ann: “It’s like you’re in a class of your own. It felt like a mathematical equation and you solved it..” Len: “Do it again!” Maksim: “It was amazing and incredible. Great job.”