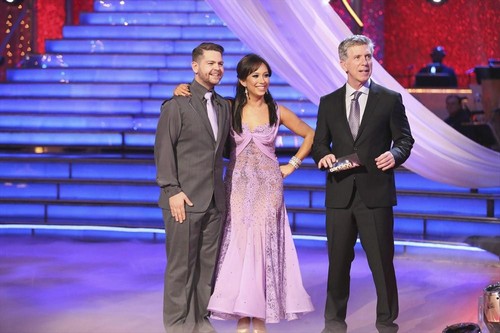 On tonight’s Semi-Finals of Dancing With The Stars the couples competed in two rounds of dance.  For his first round Jack Osbourne danced a Jazz routine for a dance style he had not previously performed.  To check out Jack’s DWTS bio [CLICK HERE]  If you missed tonight’s show you can read a full and detailed recap, right here.

On last week’s show Jack was given a 29/30 for his Viennese Waltz routine.  Carrie said about his dance: “What you do is build your whole journey on strength, you got flair and it was just amazing.”  If you missed any of last week’s performances, you can check out all the videos, right HERE.

Jack Osbourne and professional dancer Cheryl Burke: danced a Jazz routine.  Jack is excited about being in the semi-finals and tweeted this about making it, “Holy crap!!! I’m going to the semi finals! That is just craziness. Aaaaahnhhhhh! Ok game face…time to rehears. Thanks for all the support.”

Judges comments: Len said: “For me this lacked a little bit of finesse. “ Bruno: “The fact is that was a very hard routine for someone who is not used to Jazz. The interpretation was very, very good.” Carrie Ann: “I just have to say that every once in a while the pro nails it, and we have to give credit where credit is due, Chery you nailed it..” Maksim: “I loved it I thought it was great.”