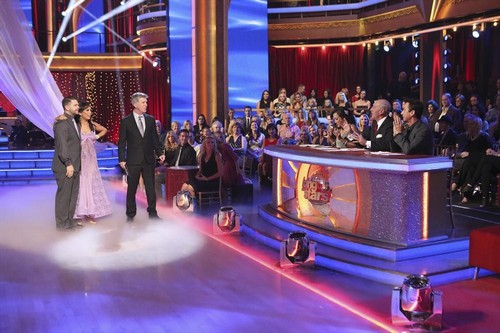 Tonight on ABC it’s the Dancing With The Stars 10th elimination of Season 17 and we will say goodbye to one contestant tonight.  The five remaining couples are in the semi-finals and will compete in two rounds of dance. In the first round of competition, the couples will perform either a Jazz, Paso Doble, Cha Cha or Tango routine to an original or “plugged” version of their selected song. In round two of competition, the couples will perform either a Viennese Waltz, Argentine Tango or Rumba routine to an acoustic or “unplugged” version of that same song. Did you watch tonight’s show?   We did and we recapped it here for you. Did you miss any of the performances? We have all the videos here for your enjoyment, right here.

We conducted a poll today and 61.63% of viewers feel that Bill Engvall will be sent home.  He is followed a close second by Leah Remini with 21.03% of the votes.  If you have not voted in our poll yet, there is still time.  [CLICK HERE]

HERE ARE THE RESULTS – WHO WILL BE IN THE FINALS

Bill & Emma and Leah & Tony are in jeopardy of elimination.

While not necessarily the lowest score, the couple going home tonight is Leah & Tony; the crowd is not happy. Elizabeth her family, friends, Tony, and the DWTS crew for everything. Tony says he has never looked so forward to practices as he has with Leah.

Bill & Emma, Corbin & Karina, Amber & Derek, and Jack & Cheryl will be competing next week in the finals.

If you want to see all tonight’s dances Click Here!