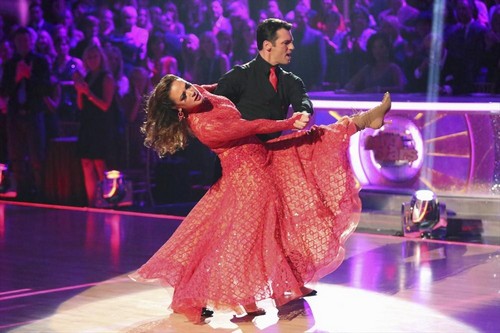 On tonight’s Semi-Finals of Dancing With The Stars the couples competed in two rounds of dance.  For her first round Leah Remini danced a Paso Doble for a dance style she had not previously performed.  Check out Leah’s DWTS bio right here.  If you missed tonight’s show you can read a full and detailed recap, right here.

On last week’s show Leah was given a 27/30 for her Tango routine.  Carrie Ann said: “I am truly impressed with your growth, but watch your arms because they lack emotion.”   If you missed any of last week’s performances, you can check out all the videos, right HERE.

Leah Remini and professional dancer Tony Dovolani danced a Paso Doble.   Leah tweeted the following to her fans, “Thank you for the votes and once again keeping us in the game!!!!!”

Judges comments: Len said: “I thought it was a little bit careful, next time give it some willy!.”  Bruno said, “Leah, my darling, you missed a turn twice..”  Carrie Ann said: “You know what I like is you definitely brought the drama, at the semi-finals we have to be a little bit stricter.!” Guest Judge Maksim: “I liked it I thought it was great, it needs a couple things, I’m overlooking that you stepped on your skirt, it’s not a technical mistake.”

Watch the video below and let us know what you think? Do you think Leah did enough to avoid elimination next week? Sound out in the comments below!