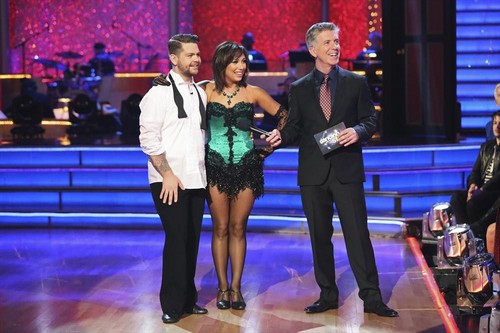 On tonight’s Finale of Dancing With The Stars the couples competed in three rounds of dance.  For the first round Jack Osbourne danced a Jive for his “Judges Pick” and repeated a selected routine from earlier in the season.   To check out Jack’s DWTS bio [CLICK HERE]  If you missed tonight’s show you can read a full and detailed recap, right here.

On last week’s show Jack was given a 33/30 for his Jazz routine.  Carrie said about his dance: “I just have to say that every once in a while the pro nails it, and we have to give credit where credit is due, Chery you nailed it.” If you missed any of last week’s performances, you can check out all the videos, right HERE.

Jack Osbourne and professional dancer Cheryl Burke: danced a Jive routine.  All Jack tweeted this week about dancing in the Finale was, “Man. This is getting so tense. Who do ya think is gonna win? #DWTS“

Judges comments:  Bruno “The kicks were good but the timing what out the window. You improved, your transformation is incredible from day one, but get yourself together.” Carrie Ann “I thought it was a 10 the first time, not this time, you were out of sync.” Len “It’s bad news that you lost it early on, the good news is that there are two dances left, don’t lose your nerve.”