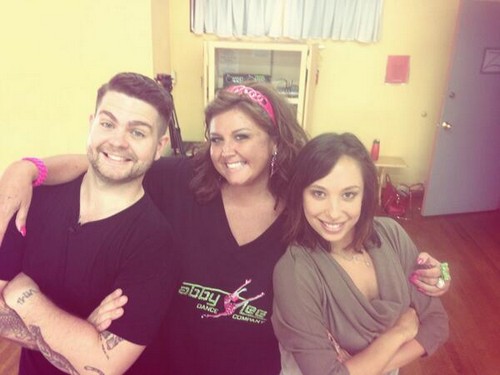 Jack Osbourne danced a Quickstep, on tonight’s episode 4 of Dancing with the Stars. To check out Jack’s DWTS bio [CLICK HERE] If you missed tonight’s show you can read a full and detailed recap, right here.

On last week’s show Jack was given a 22/30 for his Cha Cha Cha routine. Carrie Ann said this about his dance, “It was good, but not your best. You are taking big steps, watch your arms because they are not in hold”.  If you missed any of last week’s performances, you can check out all the videos, right HERE.

Jack Osbourne and professional dancer Cheryl Burke: danced a Quickstep.  Someone stopped by to give Jack some encouragement this week.  “Well Abby from @DanceMoms just crashed @CherylBurke and mines rehearsals. So random but awesome!!!”

Judges comments:  Julianne “That is such an improvement from last week, ballroom is your strength but you were so focused and you lack having fun. Still it was so good”. Bruno “He was like jumping Jack Flash, the footwork was great, you kept up the pace and don’t lose the frame”. Carrie Ann “I liked your frame, I thought you were way more animated this week and I loved it”.