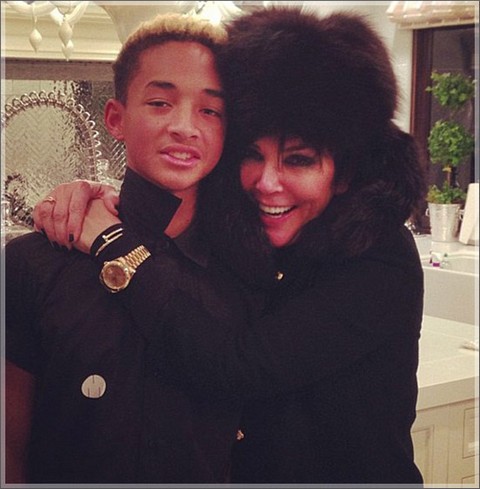 According to various reports, Kylie Jenner and Jaden Smith have been flirting up a storm and are said to be the next big thing in young Hollywood. Is that true? Well, Jaden spoke up about his relationship with Kylie in a new interview with Wonderland Magazine. He wasn’t completely honest, but he did have this to say: “I went to New York and [Kylie] came too, and then she came here [to London] and surprised me, so that’s pretty baller. She’s one of my best friends. It’s pretty awesome.”

And that’s as much as he would say. Not surprising really, considering that he probably learned from his father’s school of secrets that it’s better off not telling too much to the media. However, he should have told his ‘best friend’ that, because her family seems to have not gotten the memo. There’s a high probability that they’re the ‘source’ that has been speaking to the media over and over again about how Kylie’s gotten herself an A-list boyfriend.

A source [a.k.a Kris Jenner] told Hollywood Life that Kylie and Jaden were all over each other during Justin Bieber‘s latest concert in London, saying, “Kylie and her friends stayed to watch Jaden’s set as he was on first, they left for the rest of the opening acts but came back for Justin’s set; for the time they were both in the VIP section, they were standing very close almost holding onto each other. At one point, Kylie spontaneously hugged him and seemed to kiss him on the cheek but I can’t be sure about the kiss….From what I saw, it was clear to me that they are dating.”

Well, looks like Kris is working overtime to make sure that Kylie’s ‘friendship’ with Jaden is leveraged to its maximum potential. Do you guys think that whatever’s going on between Kylie and Jaden will last, or will the paparazzi and public attention prove too much for Jaden? He’s not as publicity shy as his father, but he does seem to stay out of most of the controversies that plague his group of friends. However, someone really should warn him to stay away from most of the people he hangs out with if he’s serious about making it in Hollywood. Despite what the public seems to think, partying and getting work in Hollywood don’t go hand in hand – especially in movies, much more so than in music. You don’t need to look any further than Lindsay Lohan to see the proof of that.