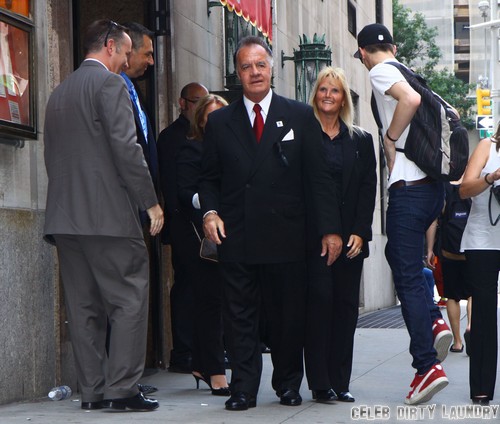 Although it’s still a period of mourning for most of James Gandolfini’s family, talk of financial dispute is already starting to make the rounds. According to the latest cover from the National Enquirer, James Gandolfini’s ex-wife and current widow are both battling over his rumored $70 million fortune.

Gandolfini has been working in Hollywood for a very long time, and Sopranos itself has minted him a fortune in salary, residuals, and other forms of income. That’s not counting the high-profile films he participated in, along with his various endorsement deals over the past few decades. $70 million dollars is a huge sum of money and considering that women in Hollywood have made a fuss over a lot less, I can only imagine what lies ahead.

Gandolfini already had a bitter divorce with his first wife, Marcy Wudarski, whom he divorced in 2002. Because they had a son together, Marcy was able to get a significant amount of money from Gandolfini in custody payments and child support. Their divorce and custody battle was fierce, especially because Marcy exposed his cocaine and druge usage to the lawyers, which obviously led to her winning some more money in the process.

In 2008, James Gandolfini married model Deborah Lin in Hawaii, and their first daughter was born last year. Unfortunately, James died before his daughter even turned 1 year old, which must be heartbreaking for their entire family.

Regardless, because James had children with both of his wives, there will no doubt be a bitter financial dispute over who gets most of his fortune. We’ll have to wait and see over the next few weeks, especially after the contents of Gandolfini’s will are released.