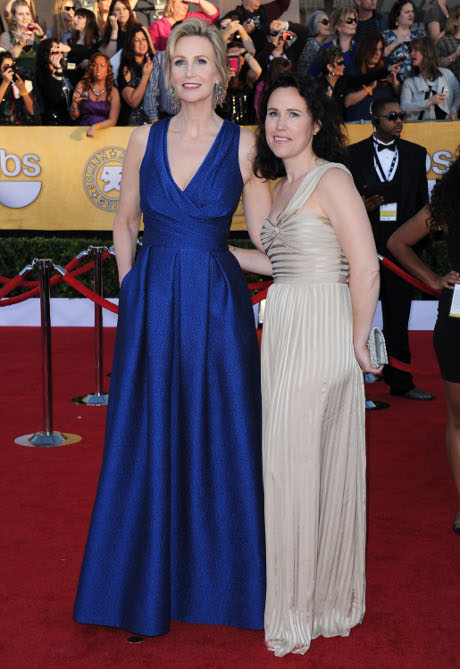 After three years of being married, ‘Glee’ star Jane Lynch & Lara Embry divorce. The two got married in Massachusetts [one of the only states where gay marriage is legal], a year before Jane officially came out, and they seemed to be very happy over the past few years.

Then again, you never really know what goes on in people’s marriages. Jane released a statement to People stating, “Lara and I have decided to end our marriage. This has been a difficult decision for us as we care very deeply about one another.”

According to the reports, Lynch and Embry didn’t go through the trouble of drawing up a prenup before their marriage, which means all their income and assets will be split 50/50. This could end up being quite a lot of money as Lynch’s career has taken off over the last few years. However, I don’t think that will end up being an issue like with other marriages because the divorce seems to be largely amicable.

What caused this divorce? Well, I hate to sound cynical but it’s Hollywood. Marriages in regular people world already have such a low chance of surviving in today’s world, and it’s bound to be ten times worse in Hollywood. Long hours, travelling, days of not seeing your partner, working with attractive people every day and resisting the temptation – all of this adds up to a difficult marriage. That’s not to say that people can’t do it – just that it shouldn’t be a surprise to see people getting divorced, especially celebrities.

What do you guys think? For what it’s worth, Jane is very private about her personal life, and this seems to have been a very difficult decision made on both of their parts.