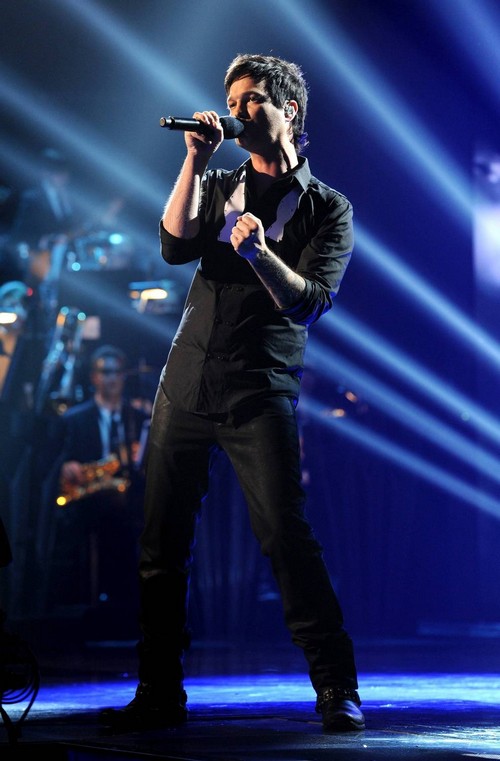 Jeff Gutt took the stage  on THE X FACTOR USA for his Top 6 live performance and Diva Week.  Jeff Gutt sang “Daniel”  by Elton John for his second song. On tonight’s show the top 6 performed live in front of coaches Simon Cowell, Kelly Rowland, Demi Lovato and Paulina Rubio for America’s vote and to make it to the coveted “Top 5.”  Did you watch tonight’s performance show? We did and we recapped it here for you.

Judges’ comments:  Demi says that she has to be honest and said it was good but a bit stale; it was great but not as good as his first performance. Paulina says that his singing to his brother is something she loved and seeing how he played the guitar was great. Simon said that it wasn’t as vocally good but the sentiment on that song was really strong; he feels like that Jeff has had a strong night. Kelly says that it’s tough for him to open up to people but the way he opened up tonight was really amazing. If you want to see Jeff Gutt make it another week, you have to vote for him.

On last week’s show Jeff Gutt performed “Feeling Good”  by Nina Simone. – Demi said: “WOW, I never thought I would hear you say this song but you killed it.  You did amazing.”  Paulina said: “What a great job, I loved it.  I think you killed it!”  Simon said: “It  was absolutely fantastic, from the minute you grabbed the microphone you owned it.  I love your Dad.  I think you are a decent guy, you deserve a break.  This is by far your best performance.”  Kelly said: “You nailed it.  Incredible job.  I will be downloading.”   Jeff got a standing ovation from the judges!