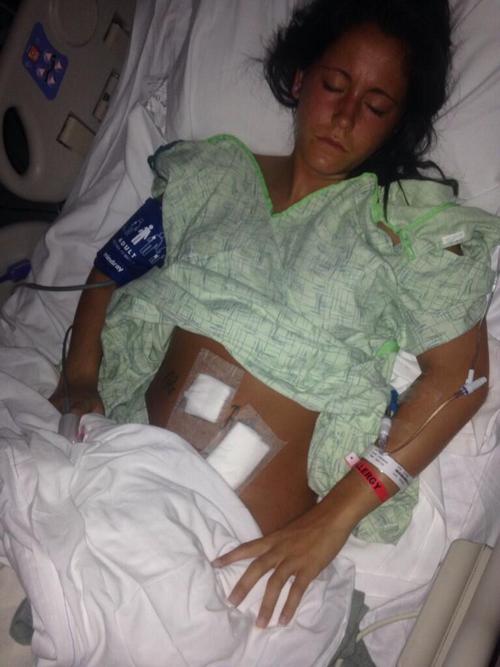 Jenelle Evans was rushed to the hospital for an emergency surgery after complaining of abdominal pain on Monday. It turns out that she needed to have her appendix removed and her new boyfriend, Nathan Griffith, told Radar that she’s been dealing with the pain for some time now.

He explained, “She’s been in pain for about a month and I suggested before that it could be her appendix. So I dropped her at the hospital before work. I told her to call me if you go into surgery so I could be there for her.”

Jenelle did have her appendix removed and the surgery went smoothly, with Jenelle currently resting. However, I find it odd that her boyfriend would talk to the tabloids so quickly after such a health scare. There’s also the fact that Nathan tweeted a picture of Jenelle after the surgery in her hospital gown, covered in bandages. She seems to have her eyes closed in that picture, so it’s possible she didn’t even know the picture was being taken. Well, Nathan did write, “Jenelle wanted me to post this. I feel so hopeless and I wish I could take her pain away… I’m sorry baby!” Famewhores are famewhores.

It’s not like I expect Teen Moms to have understanding boyfriends, but it is odd to me that they are so blind to it. Or maybe Jenelle knows, but she just doesn’t care.