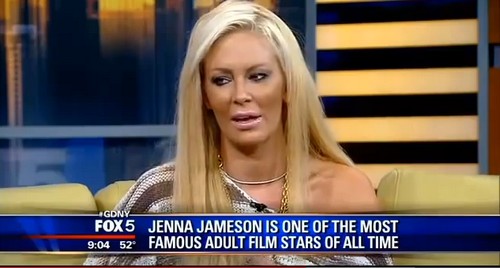 For some reason, Jenna Jameson is still famous. That’s the only reason that I can think of for people actually paying attention to the fact that her new book, Sugar, is coming out. To promote it, Jenna has been doing the promotional rounds, and by doing the promotional rounds I mean she’s been making a fool of herself in every interview she’s conducted so far. In fact, she’s reportedly so humiliated by how things have been going that she’s actually cancelled the remaining TV appearances that she had scheduled.

Two particular interviews that are being classified as trainwrecks are Jenna’s interviews with Good Day New York and Fox 411, both of which were equally cringe-worthy. A source tells Page Six that after Jenna’s interview with Good Day, her reps realized that something might be wrong, explaining, “We thought it was her heels, until she started talking. After the interview, she went and laid down on the couch in the green room. She had no sleep after a long flight and she was very tired.”

While she’s still going to conduct book signings, she’s pretty much done with everything else. Is this really surprising to anyone? First of all, who even thougt publishing a series of erotic novels from Jenna Jameson was a good idea, especially when they were based on her own life? Sure, its initial run might be successful, but after that? Secondly, while I can see why they would send her to promote the book, I cannot figure out why they didn’t go through the interviews with Jenna beforehand. Often times, when they know the celebrity isn’t really up to the task of a normal interview, the handlers or reps will discuss the predetermined questions and answers with the celebrity and the interviewer, and agree on the direction that it’s going to go in. That’s not even what happened in these interviews – they were just train wrecks, through and through.

What do you guys think about Jenna’s decision to cancel her remaining TV appearances? Do you think she should be professional and finish them, or do you think she made the right decision, instead of ruining the PR for her book? Let us know your thoughts in the comments.