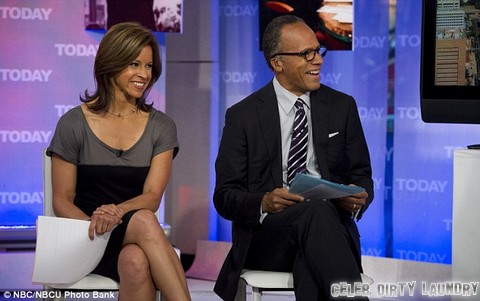 Oh boy. I think a huge can of worms was just cracked over at the Peacock network. There was a lot of confusion back in October of 2012 when, in a surprise move, NBC decided to move Jenna Wolfe from the position of weekend anchor, to news reader. If you’re a Today Show viewer it was rough to watch Jenna sit off to the side as Erica Hill took her former place beside Lester Holt on the couch.  She seemed less than thrilled but sucked it up like a pro and even from her spot now two seats down from Lester (who is clearly her good friend) she still outshines Erica on a weekly basis.

This past week Jenna announced on camera that she and her girlfriend are expecting a daughter next summer. The pregnant anchor is clearly over the moon with excitement but I’m sure it has led more than a few people to think about the situation. Rick Sanchez is an outspoken journalist that says what the rest of us are thinking and it has cost him in the past. He pondered the topic on his Twitter saying,

“Wonder if @JennaWolfe’s terrible demotion on @todayshow was b/c @NBC didn’t want a then soon 2 be pregnant lesbian to be cohost. I hope not.”

NBC has struggled in the morning show department for the last few years and I have to wonder if he could be right.  Were the powers-that-be thinking that Jenna didn’t represent what they wanted to sell? Instead of seeing her as a modern depiction of what family can be did they see her personal choices as a liability for the network? Would middle America be unaccepting of a lesbian mom-to-be having coffee with them over the day’s top news stories?

Did they pull Erica into the fold knowing that the married mom of two represents what is considered to be the norm and that norm is what NBC believes is the key to success? Tell us your thoughts in the comments below!