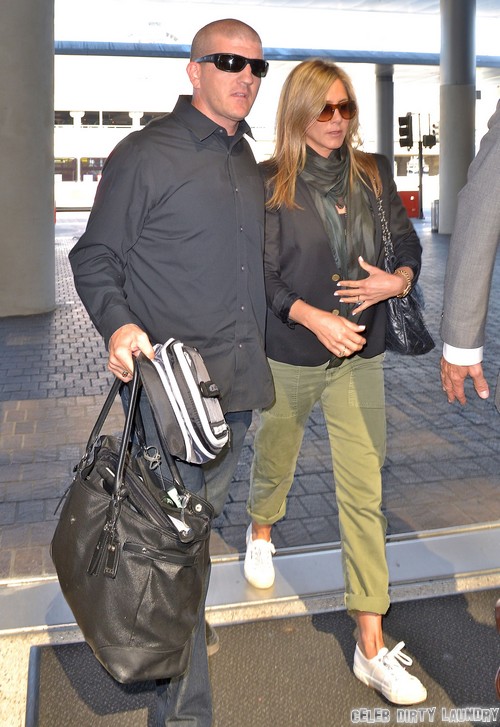 Jennifer Aniston is denying rumors of a pregnancy, instead saying the extra weight is just added pounds. Do you believe her?

It’s definitely true that pregnancy bump watching has seemed to become a national pastime, and there are way more misses than hits in that regard. But Jennifer has always been extremely rigorous about her physique and health, and so the extra weight around her stomach immediately set off speculation about a possible pregnancy. Even legitimate tabloids were screaming ‘PREGNANT?’, and the speculation was made even louder because of the lack of formal denial from any official reps.

However, Jennifer officially spoke out about the rumors during promotion for We’re the Millers, and she attributes it to extra weight. She was interviewed by the Kyle and Jackie O show and she stated (according to Radar), “There’s nothing to announce. That’s just a couple of lbs.”

Well, that should put an end to the rumors – for now. Jennifer Aniston bump watch will never really end, and one of these days, it will probably end up coming true. Jennifer has said in the past that she does eventually want to have kids, and that Justin Theroux is open to it. Whether she was making it up, I have no idea, but the interest definitely seems to be there.

It is odd that she’s so cavalier about ‘a couple of lbs’ since she has previously stated that she’s incredibly meticulous about her diet, especially at her age. Has she just let herself go after a rigorous shoot for We’re the Millers, or is she just lying to throw everyone off the trail?

What do you guys think about Jennifer’s comments? Could she be telling the truth? Let us know your thoughts in the comments.

‘We’re The Millers’ actress Jennifer Aniston dpearting on a flight at LAX airport in Los Angeles, California on August 12