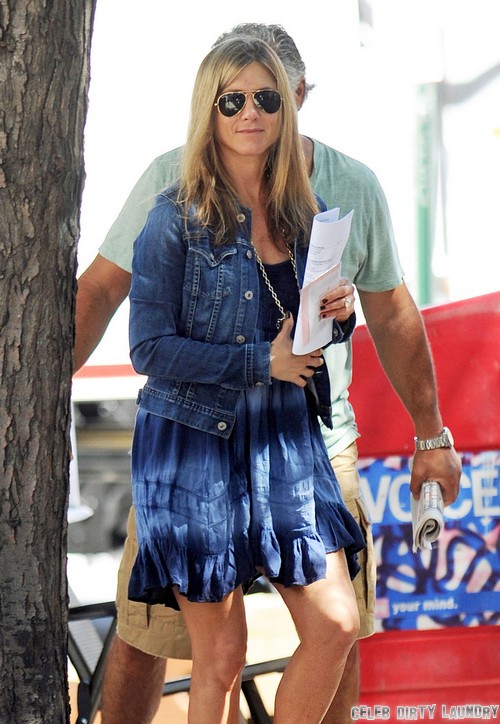 Even though Jennifer Aniston’s ‘woe is me’ routine tends to get old, I still have some pity for the way she got her heart broken after Brad Pitt left her. I don’t believe that she wanted to have kids with him ‘that year’ like she kept saying after the divorce, but I also think she wanted to start a family with him eventually. So now that she’s finally found her next husband in Justin Theroux, is she trying to pressure him into having babies with her?

I mean, why else would she be talking about his parental instincts? That too, when the conversation wasn’t even about him?

Jennifer has been promoting her new film We’re The Millers, and she was getting interviewed by her co-star Jason Sudeikis. The conversation turned to Jennifer’s parental skills in the film when she has to pretend to be a mom, and instead of talking about herself, Jennifer’s response was, “I know Justin, for instance, has extremely amazing paternal instincts. Because [growing up] he had to sort of become the parent. I think when you have to become the parent when you’re a younger person, you learn those instincts.” Um, ok. Thanks for that information. Clearly you’ve thought a lot about this.

Anyway, there are rumors that Jennifer wants to have children and she feels that her biological clock is ticking, but does Justin feel the same way? He’s busier than ever with his career right now, and he might not feel he has the time to raise a baby. Obviously, we don’t know the intimate details of their relationship, but from all the reports and now Jennifer’s interview, I have a feeling that they’re at least talking about it.

Jennifer Aniston on set of ‘Squirrels To The Nuts’ filming in New York, New York on July 30