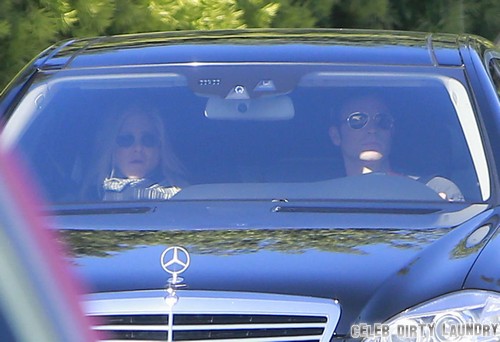 It has been just a hot minute since we last speculated about Jennifer Aniston and the rumor mill is contemplating whether or not she is pregnant, for real this time. What sparked the current debate? Well Jen did the unthinkable, she recycled a dress that she wore back in 2011 and looked quite a bit different in it now.

According to the June 23rd print edition of In Touch, Jen cracked out the Prada dress again on June 1st for good friend, Lake Bell’s wedding and she looked much rounder in it then the last time she wore it. Of course in no time flat photos popped up proving that in 2011 there wasn’t an inch of fat anywhere on Jen. That’s not to say that there is now, but she definitely looks fuller and at the very least isn’t hitting the gym nearly as hard.

Friends close to Jen insist that she’s still not pregnant, she just is slacking a bit in the fitness department. Now that the actress is happy with Justin Theroux she spends more time enjoying life with him rather than living in the gym like she used to. Maybe that simply means that Jen really is happy and doesn’t feel the need to be so hard on herself any more and that’s probably pretty darn healthy, no?

As for motherhood, do you really think it’s even Jen’s radar right now? I mean everyone speculates or feels bad for her when she’s not pregnant, but is Jen as upset as her fans seem to believe? Do you think that maybe she wants to get married first and then will see if time and her biological clock are on her side? Tell us your thoughts in the comments below!