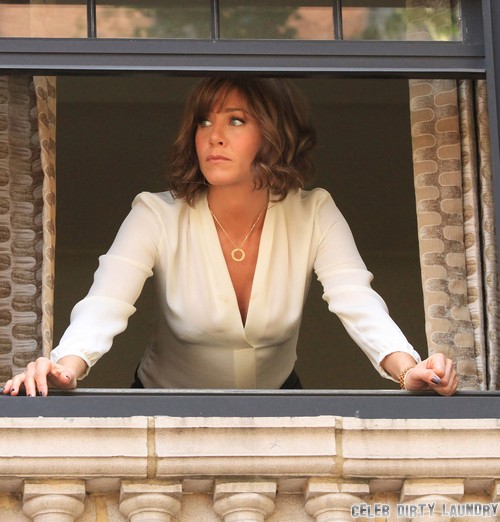 Isn’t relationship therapy something married couples go through when they’re having problems? According to a new report from the National Enquirer, Jennifer Aniston is forcing Justin Theroux to go through therapy because of his ‘commitment issues’.

A source tells the Enquirer, “Jennifer finally saw the writing on the wall as Justin — who does love her, no question — got freaked and made every excuse to delay their ‘summer’ wedding. Jen realized Justin was pulling away from her. She begged him to tell her what was bothering him — and he dropped the bomb, admitting that the idea of marriage just freaks him out.”

The source adds, “He loves her, but doesn’t understand why they just can’t continue living together the way they are now. Jennifer was devastated!” Of course, Jennifer gave him no choice in the matter, and insisted that he go through therapy. The source adds, “Justin must undergo intensive therapy to work through his commitment issues, or — buh-bye!”

Hmm… this isn’t what we’ve been hearing. We’ve been hearing that Jennifer might be the one postponing the wedding because she’s unsure that Justin is the right guy. Let’s face it, Jennifer’s already had her heart broken pretty badly with her previous marriage, so why would she want to rush into another one? What’s the hurry?

Of course, the other side of the argument is that Justin has gotten everything he wanted from Jennifer – including a huge boost to his career – and he’s trying to slowly break away. A wedding and marriage would obviously get in the way of that, so he’s trying his best to stall getting married.

Do you guys think Jennifer or Justin is responsible for postponing the wedding? Or do you think it was a mutual decision between both of them based on time constraints? Let us know your thoughts in the comments.