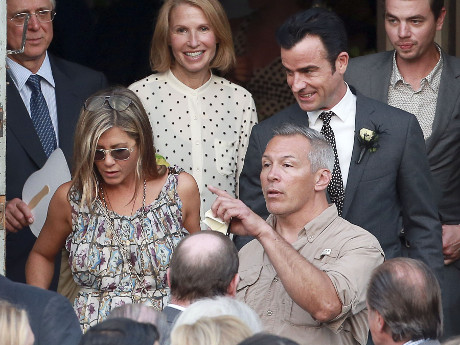 Jennifer Aniston and Justin Theroux‘s relationship has been divided in half. As Justin Theroux is hellbent on returning to NYC and Jennifer Aniston is dead set on remaining in Los Angeles, the couple’s potential wedding plans might be on the standstill — and maybe even more than that! Has Justin’s recent move to the east coast brought to light underlying issues? Does Justin not want to get married? While nobody knows for sure, it definitely seems like an awkward time to create such a vast distance between his *maybe* future bride.

“Justin is dragging his feet about the wedding,” an insider close to Justin tells Life and Style (via Radar Online). “He just has so many other focuses right now … planning of the wedding has been put on hold.”

“You can tell he’s totally comfortable [in New York.] Ever since he’s been back, he’s going about his usual routine of riding around on his bike, handing with his friends and staying at his old apartment. Things will get strained” if Justin’s HBO series gets picked up and he wants to remain in New York.

For the first time in a while, about a year, the couple won’t be by each other’s side on a regular basis. While their relationship doesn’t seem to be going down hill at the moment, that amount of distance might add some tension to the Aniston-Theroux life, and probably won’t do wonders for the planning of a wedding.

However, wedding or no wedding, sources close to Aniston say that Aniston knows they will get married eventually. And, with or without a marriage certificate, they’re soulmates. Honestly, we would hate to see Aniston and Theroux break up. But in Hollywood Land nothing surprises us.