Jennifer Aniston Merely A Pawn In Justin Theroux’s Game: He’s Using Her For His Career — Won’t Marry Her! (PHOTO) 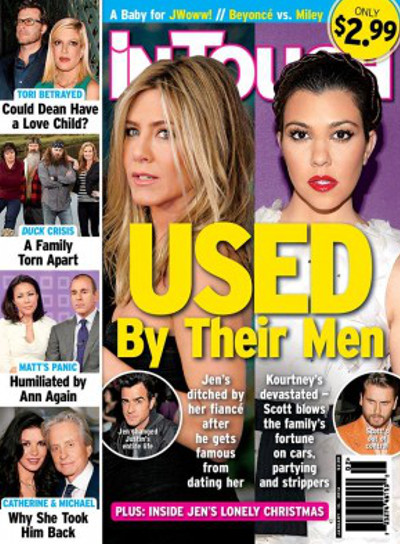 Is Jennifer Aniston being used, like a pawn, by Justin Theroux in his desperate attempts to boost his career? The rumor mill loves churning out countless stories on the catastrophic state of Jen and Justin’s relationship, and it seems the new addition of In Touch continues the tradition, claiming that Justin is “reaping the benefits that come with dating Jen.” I’m sure he is; after all, isn’t that one of the reasons why celebrities date? But, glancing at the bigger picture, I think it’s safe to say that these two lovebirds are still doing the romance dance.

The two were recently spotted being super affectionate while vacationing in Cabo with their friends (PHOTOS). The couple seems to be happy, despite what the media’s saying, and Jennifer Aniston isn’t stupid. If she felt like she was being used, then she’d have already dumped his black-tie wearing butt.

The magazine claims that Justin’s “at the top of his game, partly thanks to Jen, and since his star has risen even more over the last six months he’s been pulling away from her emotionally. He doesn’t want to screw things up by getting married when everything else is going so well.”

What do you think about this story? Do you think it’s a bunch of bologne? Or do you think Justin Theroux really does have a devious bone in his body and really IS using sweet Jennifer as a tool to rake in more fame, more success, and more money? Let us know in the comments section below. We’d love to hear from you!