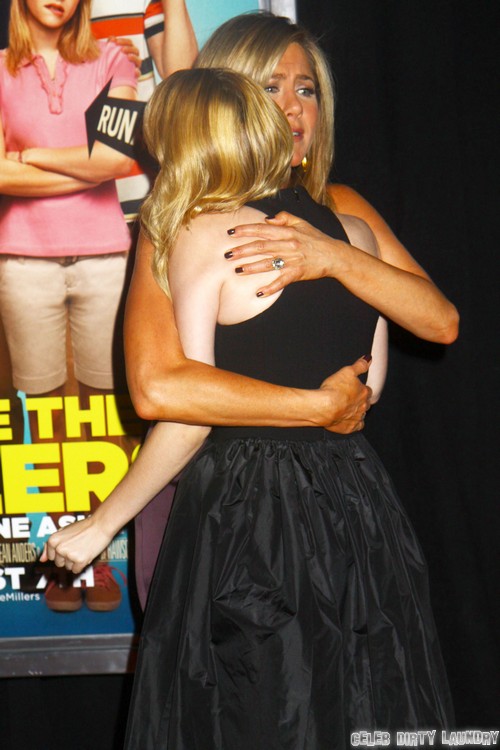 According to a new report from Star Magazine, Jennifer Aniston has advised Emma Roberts to seek therapy after her physical fight with boyfriend Evan Peters and subsequent arrest.

Jennifer and Emma star together in We’re The Millers, and Jennifer’s reportedly been Emma’s ‘main source of counsel’ since the fight went public. A source tells Star, “Emma called Jen in tears, and Jen spent hours comforting her. Jen has pleaded with Emma to break up with Evan, but Emma says she can’t let go and swears nothing violent would happen again.” The source adds, “[Jennifer has been] urging Emma to get therapy. She thinks Emma is extremely talented and doesn’t want to see her jeopardize her personal life or career.”

Well, you’d think that if the therapy advice came from somewhere, it would come from Emma’s aunt, Julia Roberts. Jennifer and Emma starred together in one movie, and I highly doubt Jennifer is the first person Emma would call at this kind of trouble. However, Emma swearing that ‘nothing violent would happen again’ does sound like the standard byline in abusive couples, so I don’t think that there’s nothing to worry about.

Emma has stayed quiet since the details of the fight leaked to the public, and any comment about the scandal has come from her reps and leaked strategically to different tabloids. Her father, Eric Roberts, says Emma is doing ‘fine’ after the arrest, but he didn’t elaborate any further.

Overall, I think this situation is definitely something to watch, although I don’t think Emma will get therapy. She won’t want to admit that there’s something wrong, although based on the details of her fight with Evan, there definitely is something wrong. No couple who fights like that is ‘fine’, regardless of what both of them say.