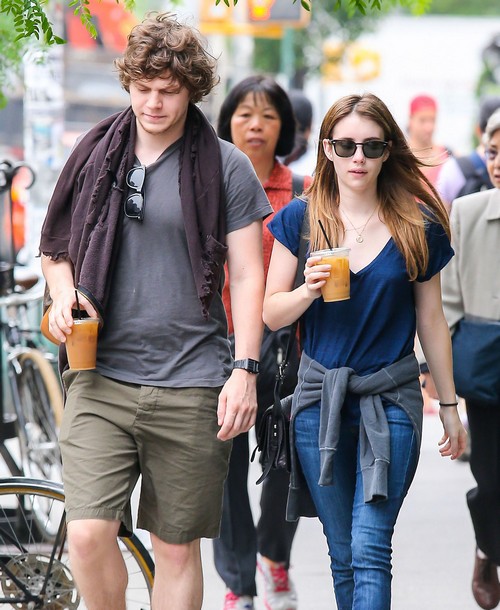 Out of all the domestic violence disputes that occur with celebrity couples, we never thought we’d hear the names Emma Roberts and Evan Peters involved in that kind of situation. Emma and Evan have been dating for quite a while now, and they’ve been relatively low key about their relationship. That might change now because TMZ is reporting that Emma was arrested for a domestic violence incident involving Evan in Canada.

According to reports, Emma was taken into custody on July 7th in Montreal , after someone called to report a fight that they overheard from Emma and Evan’s hotel room. When the police arrived at the scene, Evan’s face was visibly bloodied and he also reportedly had bite marks.

Since only Evan was visibly bruised and bloodied, the police immediately arrested Emma, although sources close to Emma claim that both Emma and Evan were hitting each other. Apparently, only Emma got arrested because only Evan showed visible signs of getting beaten up.

Well, I don’t buy that. I think that’s Emma saving face through these ‘sources’, because let’s face it – if Evan was ‘hitting’ Emma, she would have shown some physical signs of injury as well. I don’t buy that she gave him a bloody nose, and he hit her but didn’t leave a single mark on her face. I’m guessing they got into a violent fight and Evan was holding back while Emma was hitting on him. Again, this is all speculation because all we know for sure is that Emma got arrested and Evan had a bloody nose and [possible] bite marks.

Either way, Emma was eventually released because Evan did not want to press charges against her. Apparently, the couple has gotten back together and both are back on set, working on American Horror Story. Hmm… seems like a regular occurrence, no? Let us know your thoughts in the comments.