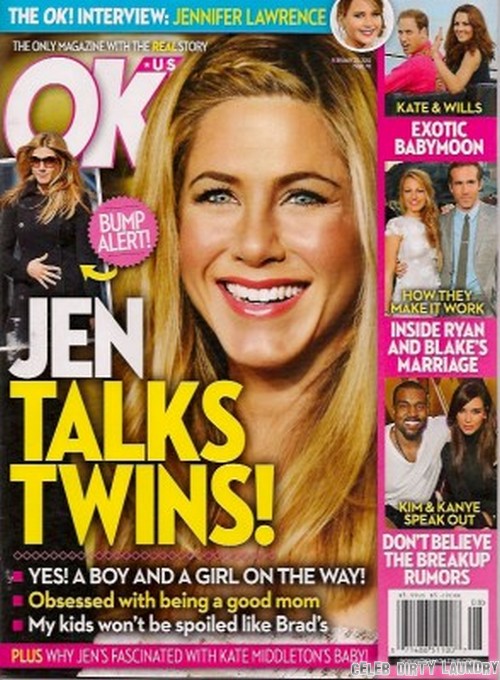 Jennifer Aniston graces the cover of the latest issue of OK! magazine and apparently they are populating her uterus once again. This time, of course, it’s twins!

The tabloid reports the same old tired story that Jennifer is knocked up once again. If she were really pregnant as many times as the tabloids have reported, she’d be worse off than Octomom right now. Seriously, how many times have they said that Jen is having dealings with children. She’s either pregnant, thinking about being pregnant, wishing she could get pregnant, adopting babies or thinking about adoption. It’s almost as if the tabloids are throwing darts at a wall of baby stories for this broad.

A source reportedly told the magazine, “With the support of fiance Justin Theroux, a contented Jen Aniston is ready to become the best mom ever. Jen’s feeling giddy with excitement right now. She’s dying to tell the world her amazing news.”

The magazine also goes on to say that Jen and Justin “have been delaying an official public announcement, but that hasn’t stopped them from pursuing baby talk with their dearest friends.”

We’re calling BS on these reports right now. We’re pretty sure if Jennifer ever actually gets pregnant, the tabloids are not going to be the first to know. What do you think?