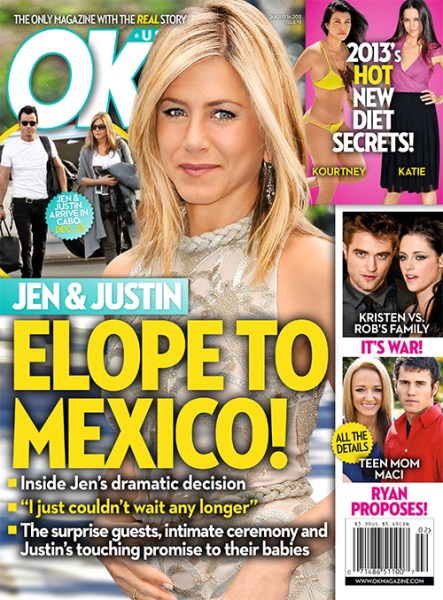 Jennifer Aniston has been on a sprint to the altar ever since Angelina Jolie and Brad Pitt announced their engagement last spring. She and fiancé Justin Theroux have been tight lipped about the wedding, but friends have speculated that a small, destination wedding in Mexico was the plan. It seems they fooled even those closest to them, and are in fact planning an elopement in Cabo!

A source reported to Ok Magazine, print edition January 14, 2013 that their holiday trip to Mexico was “a trial run for their elopement.” Apparently, Jennifer wanted ot make sure the wedding could be a “fairly easy and private occasion.” While I like the idea of a pre-elopement trial vacation, it does seem to present a semantic issue. The point of an elopement is a sudden, spur of the moment decision to wed in a far off land. Now, doesn’t it stop being an elopement as soon as they plan a trial run? It’s like the difference between second and first degree murder: as soon as they say it’s in order to elope, it becomes first degree marriage, not second degree elopement!

Furthermore, though I’ll admit I’ve never been, Cabo is like, the tourist destination in all of Mexico, right? Except for Tijuana, perhaps, but that’s for folks in a different income bracket than Jennifer. But when you say Mexico and celebs, I think Cabo. Wouldn’t Jennifer be eager to go to a more secluded area for her top-secret wedding? A source reported that Jen admitted, “I just couldn’t wait any longer.” Okay, but Cabo? I mean, this woman could charter a fleet of private jets to Antarctica if she wanted a secret wedding. As much as I’d love to see Jen married and happy, I just can’t get around the deeply flawed logic. Do you think Jen and Justin are looking for a resort wedding, or will they hold out for something more secluded?

See Pics of Jennifer and Justin in Cabo Here