Jennifer Aniston is NOT Pregnant – NO Baby Bump (Photos) 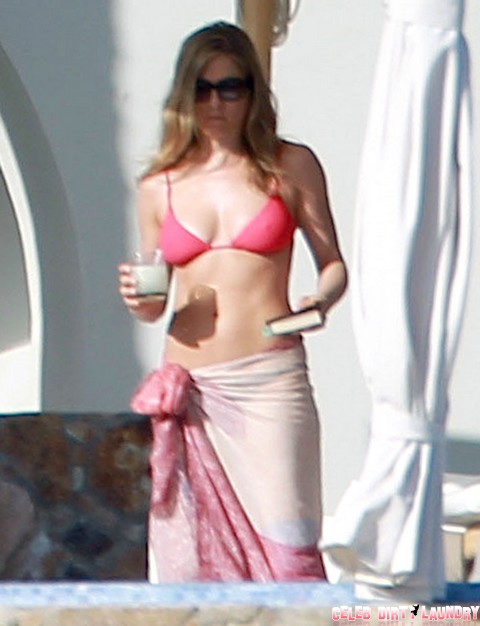 If you are like me, you’ve read all the rumours AGAIN that Jennifer Aniston is in fact pregnant and get this, its even more absurd this time around as the rumours are going as far as saying that she is pregnant with twins!  OK! even reported that the twins were boy and girl conceived through “extensive fertility treatments”.  Photos of Jen looking fit and fabulous appeared yesterday while vacationing with fiancé Justin Theroux in Mexico.

Now being a mother of twins myself, I know that undergoing an ultrasound at 18-20 weeks is when the sex of the babies can be determined, in most cases. So, if Jen knows the sex of these “twins”, she would have to be at least four months pregnant, yeah right! Take a good look at the photo, Jen is only guilty of an extremely hard body and fit stomach. It’s beyond me as to why people keep making up these stories about her when they are clearly false. Honestly, if the tabloids were right, Jen would already had have gone through ten pregnancies by now, had a boy, a girl, twins, triplets and quadruplets. In the end I can’t help but wonder how the tabloids explain themselves when tomorrow and the next day, and the next, there is no baby(s) born. I guess it is better to be wrong a hundred times than to miss the truth.

If I sound like I have had enough of this whole “baby” thing, you can imagine how poor Jen feels. Back in September she made light of the gossip mongers and in a SmartWater video ad she appeared with a massive baby bump, the video was titled “How are my little triplets doing?” and the only children we see of hers is Jimmy Kimmel, her older son and his little alien brother.

I can guarantee you one thing, Jen is guilty of a sense of humour and that’s about it.

Jennifer Aniston and fiance Justin Theroux enjoying a day poolside at their hotel on Christmas Eve in Cabo San Lucas, Mexico on December 24, 2012. Justin was checking out the ocean with his telescope.