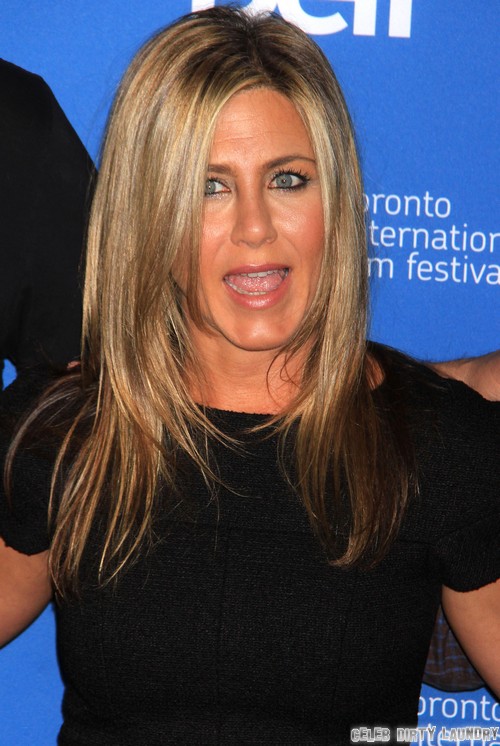 I guess this is her way of shutting down the rumors for good, since her publicist’s denial clearly hasn’t done the trick. It was reported earlier this week that Jennifer Aniston was pregnant, and it seemed to be pretty reputable coming from US Weekly. However, days after Jennifer’s vehement denial, Life & Style reports that several eyewitness say Jennifer drinking white wine at an event in Hollywood.

A source explains that Jennifer had the wine with her meal, adding, “She looked really good and didn’t look pregnant. She was with friends. Jen came in the back door with lots of security and bodyguards.”

Jennifer’s clearly sick of the rumor mill going overboard with every small change in her appearance, and when asked about the tabloid reports, she just said, “I surround myself with my amazing work, my amazing partner, my beautiful dogs, and I tune that noise out.” She also spoke about having children in a recent interview with Elle, but all she would say was that she’s at ‘peace’ with whatever happens, and she’s willing to accept whatever’s ‘meant to be’.

Well, drinking alcohol is a sure-fire way to shut down pregnancy rumors, and I’m surprised Jennifer hasn’t used it before. And although some people will still claim that drinking small bits of alcohol during the early days of pregnancy is acceptable, this is Jennifer Aniston we’re talking about. There’s no way someone that health conscious would ever be willing to take that kind of risk.

In the end, even if she’s not pregnant now, it does seem like she is more open to having children than she was in the past. Do you guys think she will get pregnant anytime soon? Let us know your thoughts in the comments.