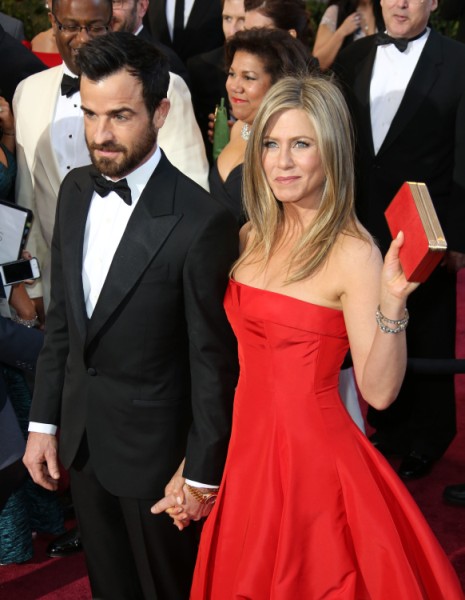 With all the Brad Pitt and Angelina Jolie lovin’ going on lately I almost forgot that the other third of that triangle is planning her own happily ever after. But is Jennifer Aniston worried her upcoming walk down the aisle will never happen?

We all know Jennifer Aniston’s wedding was bumped yet again. Both parties are saying it’s because of scheduling conflicts. Justin Theroux snagged  a role on a new HBO pilot and Jennifer picked up another movie for some reason. That woman doesn’t make great movies but lord, if she doesn’t keep trying. So now we’re hearing about a winter wedding – maybe even a Christmas one. But The Enquirer is suggesting the more Jennifer has to wait the more insecure she’s getting. She even thinks Justin may even be just using her to boost his own career. What?! No! Hollywood B-list actors would never do that!

“Justin swears up and down that he loves Jen dearly, and he’ll make her his wife, just not right now. But Jen isn’t a happy camper over taking a backseat to Justin’s career,” a source said.

Look, Justin probably is enjoying the fruits of the labor of being Mr. Aniston. He needs to strike while the iron is hot. But I don’t think he’s going to screw up that situation anytime soon. He’s got a good thing going. He had a pretty solid career before but he’s almost a household name now. Breaking America’s Sweetheart’s heart will definitely set him back a few years. And I know he likens himself to a true artist with his bushy beard, leather jackets and David Lynch street cred but he’s definitely not ducking in the alley door whenever he and Jen go out to dinner. This dude’s in it to win it. He’ll throw a ring on that finger sooner or later. Trust.